The third installment of the Water Seminar Series for Winter 2020, co-presented by the UCR School of Public Policy and the UCR Library.

California has relied on groundwater pumping to provide nearly 40% of its water supply, on average, for urban, industrial agricultural and other consumptive uses. The reliance on groundwater has been much higher than 40% during drought conditions. The utilization of groundwater has exceeded its average annual replenishment by nearly 2 million acre-feet. Most of the overutilization of groundwater has occurred in the highly productive San Joaquin Valley of California. California's groundwater usage was largely unregulated until the state legislature took up the issue in 2014 and passed the Sustainable Groundwater Management Act (SGMA) in 2014. This seminar will focus on challenges and opportunities with SGMA. In most of the critically overdrafted basins, Groundwater Sustainability Agencies (GSAs) need to set a limit or “cap” (allocation) on the overall amount of groundwater that is removed from the basin. Making pumping allocation decisions has proven to be a very difficult task for GSAs. SGMA expressly does not create or adjust groundwater rights and the basic law of groundwater rights remains largely unchanged. Simply put, this means that while GSAs are tasked with managing groundwater with the goal of bringing groundwater conditions into balance and stopping further depletions and other undesirable impacts, they do not have the authority to change or modify groundwater rights. Thus, GSAs in critically overdrafted basins are struggling to make allocations that are consistent with the law of groundwater as articulated by the common law and a series of adjudicatory court decisions over the last 100 plus years.

Daniel “Dan” M. Dooley is a Principal in New Current Water and Land, LLC, which provides strategic advice on major water issues and connects private equities to water infrastructure projects. He left the University of California Office of the President after seven years as its Senior Vice President for External Relations. Dan currently serves as chair of the board of directors of Sustainable Conservation. He is a founding member of the Advisory Board of the Public Policy Institute of California Water Center. Dan previously served as Undersecretary of the California Department of Food and Agriculture (1977-80) and Chair of the California Water Commission (1982-86). He has served on the National Academy of Sciences, Board on Agriculture and Natural Resources, and the Western Rural Development Center Board. 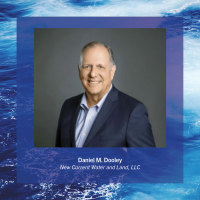