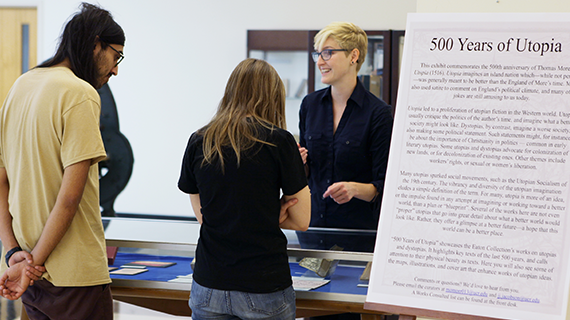 More's book led to a proliferation of utopian fiction in the Western world. Utopias usually critique the politics of the author’s time and imagine what a better society might look like. Many utopias sparked social movements, such as the Utopian Socialism of the 19th century. The vibrancy and diversity of the utopian imagination allude to a simple definition of the term. 500 Years of Utopia explores this subject and showcases the Eaton Collection’s works on utopias and dystopias. It highlights key texts of the last 500 years, explains their importance, and calls attention to the beauty of the books as artifacts.

The exhibit also celebrates the 50th anniversary of the original Star Trek series, which premiered on September 8, 1966, with a display of Star Trek memorabilia for the Eaton Collection.

500 Years of Utopia is the first of a series of exhibit collaborations between the Eaton Collection and UCR’s Science Fiction and Cultures of Science Program (formerly Science Fiction and Technoculture Studies). JJ Jacobson, the Klein Science Fiction Librarian, co-curated it with graduate student Irene Morrison, who works in the field of utopian studies, specifically utopian literature and real-world utopian ideologies.

The exhibit will remain on display on the fourth floor of Rivera Library until December 15, 2016.