A flag – and a story – for every hero 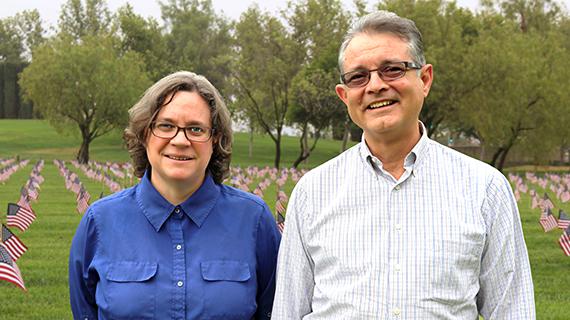 Volunteers at Riverside National Cemetery’s annual “A Flag for Every Hero” event on Memorial Day weekend 2019 can now read biographies for many of the Veterans whose graves they adorn with flags, thanks in part to the work of two UCR Library employees.

“It’s important that we recognize that people who served in the military who are interred in RNC – that they had a life beyond the military – and that’s what we’re trying to capture,” Koziar said.

“It was a project that mattered to me,” Hedge Coke explained, because it blends creative writing, local history, archival research, digital media, geospatial resources, and more. “You don’t create a project to push your agenda into the community. You fashion a project to fit what already exists there.”

According to the U.S. Department of Veterans Affairs, the Veteran population in California in 2016 was 1.74 million, the highest of all 50 states; and 131,000 Veterans resided in Riverside County. Those are among the reasons why Hedge Coke believed that the project’s aim and impact would be deeply meaningful to this community.

Hedge Coke’s project proposal intended to create an interactive GIS (geospatial information systems) application so that visitors or researchers could discover the life stories of the Veterans interred at RNC, which would be written by participating K-12 students. GIS consultant Mike Cohen developed the GIS application, which launched at the Closing Celebration on Nov. 29, 2018. The project also generated nine documentary films.

When Hedge Coke visited the RNC site with Koziar she was convinced that, with Koziar’s expertise and with UCR’s on-campus research libraries, they would be able to accomplish this colossal task.

“A lot of people have done work on this – but the base is the base, to give credit where it’s due,” Hedge Coke said. “Everything could not operate without the work that Kat put into it.”

Koziar created and runs the foundational hub of the project, on which everything else continues to expand, Hedge Coke explained. “Everything is semi-reliant – if not completely reliant – on that hub. We absolutely have to have that base to make a project of this breadth successful. It’s quite a bit of exemplary work from this brilliant woman.”

Koziar designed a filing and labeling system to allow the graduate fellows to claim particular people so they could divide up the work while avoiding duplicate efforts, and then to give K-12 students access to basic information about the interred for their research while writing the memorials. “The majority of the students working on this – they’re not data scientists, they’re in humanities,” she said. “I was able to teach some of these other skills because, even if they don’t think about it explicitly, they still have to use it. I enjoyed that.”

To assist with the project, Koziar recruited Rios for his expertise in local history, genealogical research, and his work with Inland Empire Memories -- a fledgling local cultural heritage collaboration; and Brian Geiger from the CHASS Center for Bibliographical Studies and Research.

Geiger helped tremendously because of his connection to the California Digital Newspaper Collection, which the students relied upon significantly while researching, Koziar said.

Hedge Coke acknowledged that Rios and Geiger have done a phenomenal job teaching the graduate fellows and K-12 students about local history, historical research, and where to find archives to learn more about the lives of the interred.

“The children are learning about some of the people who were little-known soldiers,” Rios said. “It gives them an idea of the sacrifices that people have made, and that it’s not just one particular group of people – it’s a wide variety. It’s great because this is Inland Empire Memories and that’s what our responsibilities are: to share resources about the history of people in Riverside and San Bernardino counties.”

The team dedicated to Along the Chaparral has included 75 adults and 2700 K-12 students to write the biographies – from Riverside Unified School District, Sherman Indian High School, Highland Academy in Beaumont, and other schools in Anza and Temecula. At times, up to one-third of the students in a class have discovered they were related to the person they were assigned to research, Hedge Coke said.

The Along the Chaparral team is developing a curriculum so that this project can be duplicated for other Veterans’ cemeteries with K-12 students nationwide, Koziar said.

To date, the students have published more than 500 life stories on the app. Considering the involvement with research, with story craft, with innovative digital platforms, and with K-12 students creating publishable work that heightens memorialization of these lives, the future impact of the project with K-12 students and teachers, UCR students and community, the city, county, Riverside National Cemetery and the greater region is truly immeasurable.