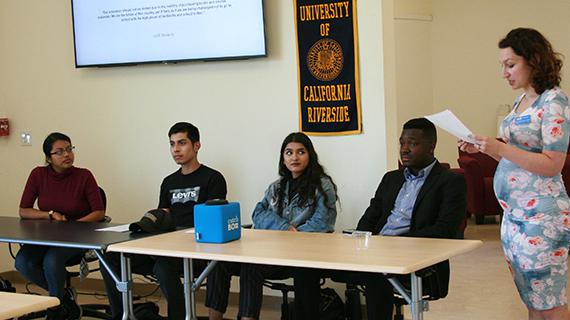 Where there’s a will, there’s a way – and a team of UC Riverside faculty and staff has devoted the last few years to finding innovative ways to make course materials more affordable for our students.

Survey results indicate that the Affordable Course Materials Initiative (ACMI) program has succeeded so far, having saved students more than $1.5 million over the past two years, according to Instructional Designer Nathaniel Wildes.

Wildes calculated these savings by factoring in the current quarter and recurring courses. “On average, it’s a little over $100 cost savings per student,” he said.

He shared these facts and more on Thursday, April 5 at an event called Democratizing Access to Student Success: Student and Faculty Perspectives on Affordable Course Materials, where attendees learned about the local impact of the ACMI since its 2015 launch. Held in the Center for Teaching and Learning on the first floor of Rivera Library, the event was co-sponsored by the UCR Library, the UC Riverside chapter of CALPIRG, and ITS.

“This is a critical social justice issue and one that is especially important on our campus,” said UCR Library’s Director of Teaching and Learning Dani Brecher Cook, who also coordinates the ACMI program for UC Riverside.

Cook’s welcome remarks included statistics from the UCR Basic Needs Working Group, which reported that six out of 10 students experience food insecurity during their time at UCR and may not have sufficient funds to afford textbooks.

Miguel Ramirez, a second-year anthropology major, Vice Chair of the UC Riverside chapter of CALPIRG, and campaign coordinator for the Higher Education Affordability Campaign, ambitiously bought all his textbooks as a freshman. “But I found myself not having enough money to afford three meals a day,” he said. “The average student is expected to pay $1,200 a year in textbooks and school supplies which, for me, is equivalent to almost 3 months of rent.”

Ramirez appreciated that courses using open-access resources gave all students the same opportunity to succeed. “And in my experience as a student, I can tell that my peers in the classroom like it better, too,” he added.

Fifth-year religious studies major and member of Mujeres Unidas Abigail Garcia tried to cut costs by purchasing earlier editions of textbooks or by using eBooks, but found that those alternatives created other challenges. “With older versions of textbooks, I have to make extra efforts to find where the professor is at in my version. It is a lot cheaper, but it doesn’t allow me to be in sync with the rest of the class,” she said. “With eBooks, it doesn’t give me the opportunity to annotate as freely as I’d like to.”

Huma Khan, a first-year business major and CALPIRG member, appreciates the portability of eBooks. “I’m a commuting student, so I would have to carry like 3 textbooks in my bag every day,” she said. However, certain rules during exams can create obstacles students who rely on eBooks or online-only resources. “Sometimes in midterms, teachers are like, ‘Yeah, you can use a book but you can’t use your computer,’” she added.

Both Garcia and Khan have felt frustrated by spending high dollar amounts but only reading one or two chapters in a textbook as well as with access codes. Khan explained, “For my last math class, I had to buy a textbook for the access code and it was $160, and I never even used the textbook.”

“Like a lot of students, I actually went without,” said Semi Cole, ASUCR Vice President of Internal Affairs and a fourth-year political science & public policy major. “I decided to see what I could do, learn what I could from lecture, and just see how it would work. Ultimately, my academics suffered.”

“We need to continue to move forward on this issue and expand to a larger departmental commitment,” Cole added. “We’ve seen from the students here that allowing open source textbooks in the classroom can be successful.”

“It’s deeply appreciated by our students,” said Cook. “It can also lead to innovative and engaging pedagogies.”

The ACMI was first spearheaded by Chikako Takeshita, associate professor of gender and sexuality studies, and launched at UCR thanks to an $18,000 grant from Computing and Communications. Due to the success of the initial program, in 2016 an additional $150,000 from the Student Technology Advisory Committee established an endeavor that would span three years. At present, the ACMI is in its second year of this longer-term effort.