Campus icons come to life in the Creat’R Lab 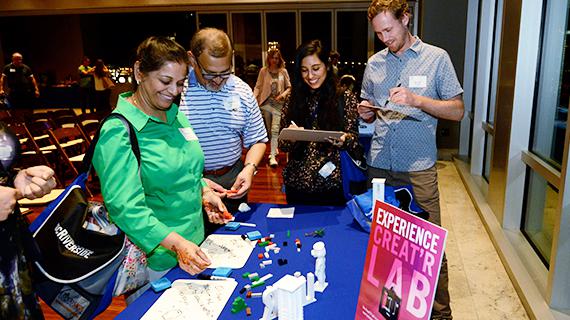 Many UCR alumni enjoy visiting campus – but it’s not always possible for them to make the trip.

To remedy this, UC Riverside’s Office of Alumni Relations turned to the Creat’R Lab in the Orbach Library to help take a few campus landmarks on the road – specifically the Bell Tower, the UCR initials (by the HUB), and Scotty the Highlander bear.

“We requested 3D prints of these campus icons to take to regional alumni events around the country as part of a plan to bring the campus experience to our alumni and supporters in their communities,” said Development / Campaign Communications Manager Jennifer Merrett. Their first event this quarter was a “Living the Promise” reception at Petco Park in San Diego on Monday, Oct. 1.

Part of the Creat’R Lab’s mission is to foster such collaborations. “The initial meeting was very motivating, since the Alumni Relations team was pretty excited and energetic,” said Michele Potter, the Creat’R Lab’s 3D printing specialist. “They had a lot of ideas for bringing creativity to alumni events and giving attendees fun ways to be interactive and creative.” 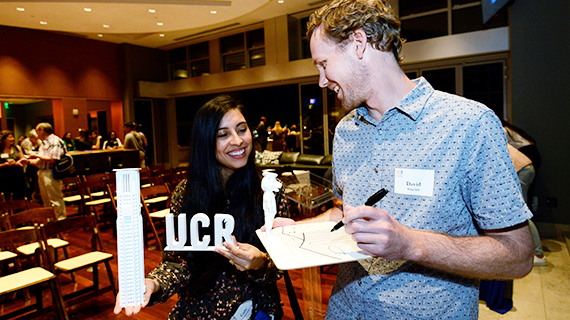 Alumni Marketing and Communications Manager Kendall Burks worked closely with Potter during summer to refine the 3D-printed replicas. To increase alumni nostalgia, Burks suggested putting blue glow sticks inside the Bell Tower miniature so it would resemble UCR’s full-size Carillion tower when lit up at night.

Potter collaborated with a design partner and lecturer from UCR’s English department, Aaron Potter, to modify the 3D model so it could be lit from within. “Michele was meticulous about perfecting the holes in the bell tower, and it was so cool to see the blue light emanating from within!” Merrett said.

While not exactly to scale, Potter explained that the finished model of the Bell Tower is quite an achievement as it measures 30 centimeters tall, which is more than twice the build height of the Creat’R Lab’s Makerbot Replicator.

“I am pretty excited to have done this project and I hope the alums like the models,” she added.

“Michele in the Creat’R Lab was such a pleasure to work with. She went above and beyond to bring our idea to life in better ways than we had planned, and she provided thoughtful suggestions for engaging our guests in new ways,” Merrett said. “Our team also enjoyed learning about the Lab and the work that Michele does to support students, faculty, and staff in pursuing creativity and innovation.”

The replicas have also been popular with students who have seen them in the Creat’R Lab over the summer. Potter said, “They have been really excited to see the various prototypes and many have asked if they can have much smaller copies for themselves.”