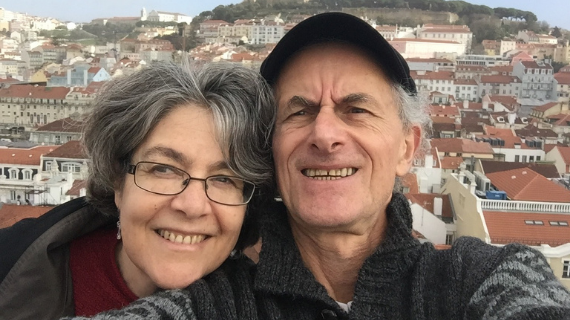 In 2006, Ann Frenkel joined the UCR Library as the Assistant University Librarian for Research and Instructional Services (later promoted to Associate University Librarian), along with her husband, Gwido Zlatkes, who became a librarian first in Special Collections and University Archives, and then in Metadata Services. Ann and Gwido met at Brandeis University outside of Boston, Massachusetts, where Ann worked as a reference librarian and Gwido worked as a graduate student employee at the library information desk.

In 2016, Ann was promoted to the role of Deputy University Librarian. Throughout the years, she has influenced instruction activities, programs, and services that support UC Riverside’s research, education, and service mission. She has also guided the creation of policies and communication strategies for the library. The lasting impact of Ann’s role and work with the UCR Library is extensive.

As her retirement date drew closer, we invited Ann to share some of her UCR memories with us.

What was your favorite part about working at the UCR Library?

Teamwork. Being able to work with staff in all different departments, divisions, units and create things we've never done before, new services, watch people come up with really creative solutions. And then, because of my particular position, I had the ability to give people the tools they needed, whether funding, or the ability to make a decision. I could help people be able to do things, give them what they needed to make things happen. It was fun and rewarding to see people develop and grow in their careers, and personally, as well.

One downside is that I've had several people leave and go on to other positions, bigger positions. But that also is part of the joy of working, even though it's always hard to lose people. It's been a delight for me to see people grow, and I feel like, “Oh, I had a tiny little hand in that!”

What are the biggest “wins” from your time working at UCR?

The reorganization with Research Services and Teaching and Learning is a big win in that I was able to do it together with the directors of the two departments and with the department staff. We worked as collaboratively as we possibly could. It was never perfect, it's always going to be a work in progress, and there are different ways and places for it to go now that I am leaving. We gave ourselves the freedom to imagine what it could look like, and we came up with a plan and we tried it out. Yeah, things changed a lot, but it was really rewarding work.

I think that the furniture and collaborative working space projects in both Rivera and Orbach were also big wins. In my memory it was so much fun because it involved so many people and we definitely had to come up with compromises, especially around colors, I remember! I think, in the end, everybody was satisfied. But we worked together and really envisioned using those spaces in new ways. What's exciting now is that it's going on to phase two or phase three with a new focus, and we'll see where it goes.

The Creat’R Lab is definitely a big win, from its beginnings with a couple librarians creating some Maker Boxes, to saying, “Hey, let's get a 3D printer and see what we can do with it!” and then finally developing a dedicated space that the students took over as their own. That has been really exciting.

There's one more big win from the early days that I remember -- something that seemed like a revelation at the time, and now it's old hat. When I first arrived, we had very rigid policies about what you could do in the libraries. You were supposed to sit in your seat and study and not talk very much, and that was about it. You couldn't eat or drink, and there weren’t places to work collaboratively with others, and the library wasn't seen as a “comfortable” space. I wanted it to be a space where people wanted to be -- and it needed to include all the things that one needs to have to make yourself comfortable, including food and drink. Within the first year I was here, I said to the then-University Librarian, “I think we should revise the food and drink policy to allow it.” She let me come up with a way to do that, and we moved on from there.

I also have a philosophy about rules: that you only should have rules in libraries when you really, really need them. And you shouldn't have rules just for the sake of them. That has always felt very oppressive to me, so I'm always thinking, “How would this make me feel?” and I make decisions accordingly.

What are you going to miss the most?

I know it sounds pat, but the people. I'll really miss the teamwork. I've always been able to work well with my colleagues and form really good working relationships. We truly have enjoyed working together. We've had a special connection. Those relationships are really important.

It's odd retiring when we're still in a remote, Zoom environment. I still see people on Zoom and I'll miss that, as well. I also have missed over this past year the casual contact with people in the office. It's fun, working together with people. That's a huge part of the job. It's why things work. When things work well, it's because you've been doing things together with others.

What's next for you?

I will be, probably the majority of the time, living in Warsaw, Poland with my husband Gwido. We won't be in a long-distance relationship finally, which we're really looking forward to.

Gwido and I have a huge number of translation projects. We translate under several pseudonyms -- Frank L. Vigoda (Polish to English) and Franek Wygoda (English to Polish). We have a book that's coming out in May, a translation to English from Polish of a memoir of one of the most famous Polish dissidents, Karol Modzelewski. It was supposed to come out last year, but got delayed during the pandemic.

One other thing that is coming out soon is a translation from English to Polish of Float by the Canadian poet, Anne Carson. Gwido translated it, but I helped at the very end of the project significantly, and I feel very connected to it. We've always translated from Polish to English together, and he does English to Polish, usually on his own. But working on this project together made us realize how I can be effective as a partner in that process, as well. So we're looking forward to that when we live in Warsaw.

We also hope to travel more. I think being cooped up with the pandemic has made us a little bit more impatient, like, “Oh, we want to go to Rome! Oh, we want to see Paris again! Oh, we want to go here and there.” Our base in the United States will be Portland, Oregon. I have family up there and grew up in Oregon, so I feel quite connected to that region.

What’s your funniest memory from your time at the library?

It’s not really funny, but it is interesting -- we now have a fairly elaborate process that we go through when a student asks to shoot a student film in the library. We ask, “Do you have any fake blood or fake weapons?” That's because there was an incident several years ago when we had a supposed active shooter, and the entire library evacuated, and we were hiding behind bushes for like three hours. What happened was that a student was doing a film in one of the group study rooms and was using an imitation gun. Somebody saw it and reported it, and the rest was history.

So, talking about not having rules for rules sake -- it’s kind of unusual that we ask those questions, but there's a reason why we have to ask those things!

Do you have any parting gems or wisdom to share with your colleagues and community?

One is that I think a key to working in libraries, probably working in general, is to always stay flexible. To not have very rigid ideas. And I say this as somebody who's very opinionated and bossy, at times! But I know that, despite all that, my opinions can be pushed and changed. I think that's important. The second thing… As a leader or as a manager, it’s important to err on the side of giving people more responsibility than you might even think they're ready for because that's how people grow. It’s sometimes hard to find that fine line between delegating and giving someone responsibility, or over-managing / micromanaging them. There's a tension between those two, and I think it's always more rewarding and it's better for you and better for others to err on the side of a more laissez-faire approach because it gives people the freedom and space to develop. It's scary to do this, and sometimes it feels like you're ceding responsibility. But I have had the chance to really see this work, and it’s so rewarding!

We at the UCR Library are grateful to have known Ann as a leader, colleague, and friend for the past 15 years. We celebrate and deeply appreciate her many years of excellent service, and we wish both Ann and Gwido all the best in their next adventure. Congratulations, and we will miss you!