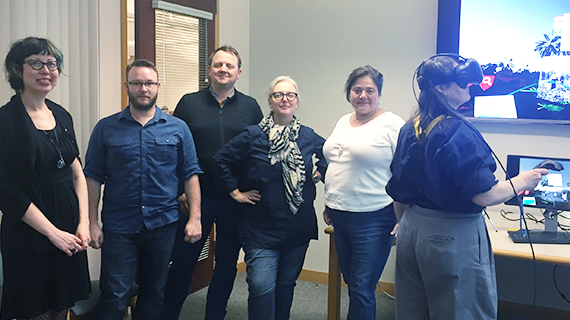 UC Riverside’s Associate Professor of History Juliette Levy likes to teach from the edge of the e-learning revolution.

Her latest experiment involved a virtual reality (VR) platform intended to stimulate intellectual learning on an emotional level for the students in her History 20 / World History course. Dr. Levy co-created a VR application called “Che’s Village” and invited students and faculty to test and review the platform in Orbach Science Library on February 15 and 16.

"Juliette felt that the library is precisely where this type of exploration should take place, as our mission is to expand critical thinking skills in studnets," explained JJ Jacobson, UCR Library's Jay Kay and Doris Klein Librarian for Science Fiction. Jacobson and Dr. Levy collaborated for several months on the concept and development in order to bring "Che's Village" to life.

“We serve a population of students who are digitally savvy,” Dr. Levy explained. “We have an amazing student body and an amazing faculty, and we need to teach them to think critically using the tools in their environment.”

Gesturing toward the wall, where a large monitor displayed what the student in the virtual reality goggles was seeing at that moment, Dr. Levy added, “This is the future of public education in here. Technology is a means to activate and render moments of the learning experience more intense.”

The platform was built to amplify students' experience of studying Che Guevara's speech, "Social Ideals of the Rebel Army," which he delivered on January 27, 1959. Guevara along with Raul Castro and others had recently won the rebellion against the existing Batista regime in Cuba, Levy explained. In his speech, Guevara had to balance the nationalistic, pro-Cuba intent of Castro with Guevara's own intent to lead a communist revolution.

The application’s co-creator and head of a VR prototype studio named Shovels and Whiskey, Tawny Schlieski stated, “We built this VR environment for students who have read Che’s speech. It’s meant to provoke them into compelling questions, to connect pieces of text with other pieces of research.”

Once inside the virtual world, exactly as Schlieski had explained, the user could see the text of Che Guevara’s 1959 speech in the setting of a Cuban jungle, with links to other content directly connected to highlighted passages in the speech. Using a pointer, the user could open and view the additional resources – whether text, images, or video – to elaborate on the themes of that particular passage. “It’s like footnotes, but in a virtual reality environment,” one user commented. 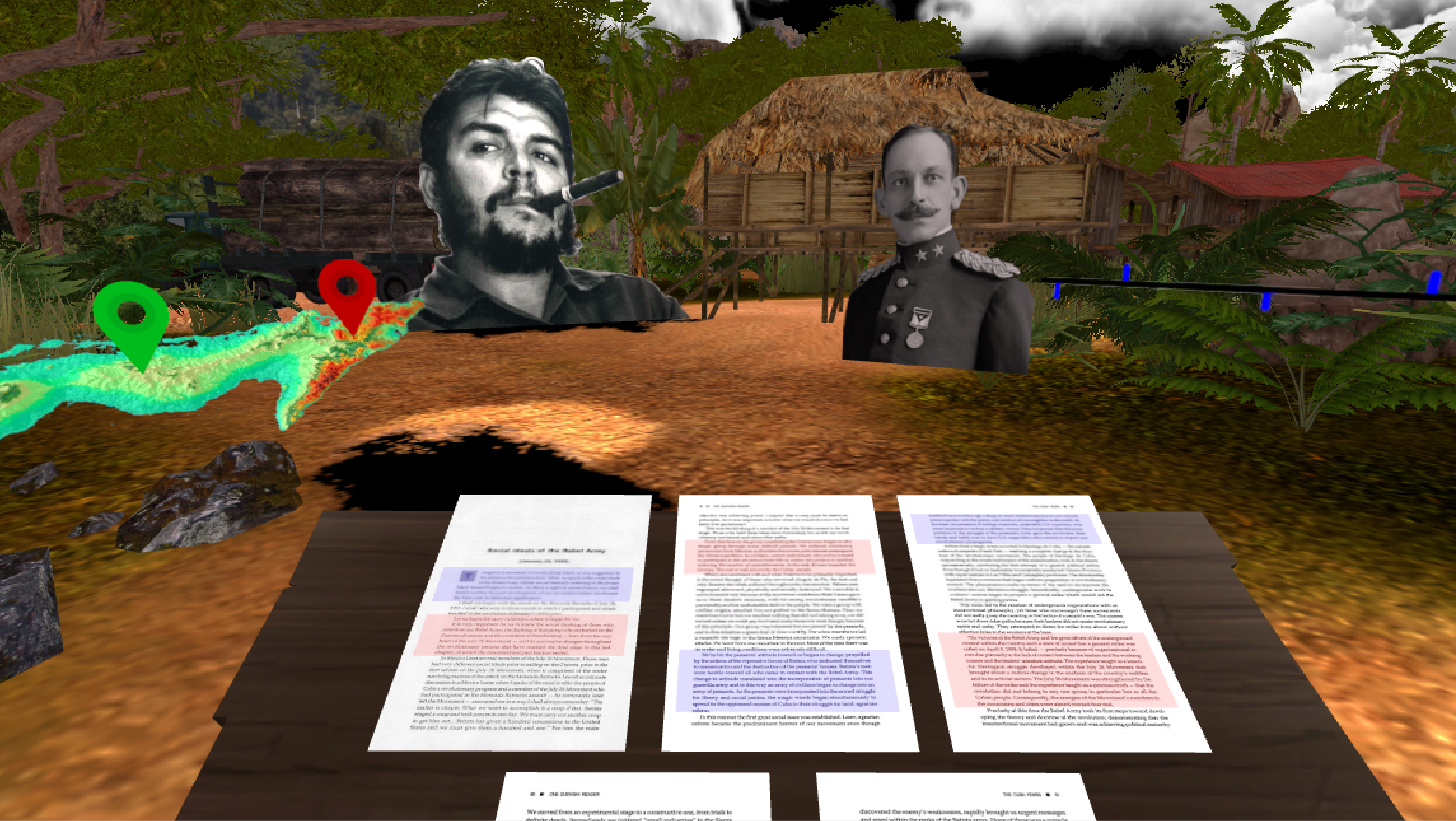 In some ways, the reflection indicated that UCR professors who leverage technology are already doing something right. One of the student testers observed that his best friend, who commutes over 50 miles to attend a different college, does not go to office hours because of the additional time it would require. He added, “He could have a more intimate learning experience if there were online office hours.”

“Good teaching is good teaching, whether that’s 100 years ago or 100 years from now,” Dr. Levy commented. “We owe our students to help them learn better and faster, especially with the amount of debt students are taking on to get an education. We are making it deeper and better with technology.”

“We’re looking to build applications of new technology in humanities that provoke critical thinking for students,” Schlieski stated. Reflecting on her previous work with Intel, she added, “From an industry perspective, problem-solving skills are sorely lacking in recent college graduates. Technology becomes obsolete so fast, but critical thinking skills are always valuable.”

Jacobson added, "After more than 10 years of library and education experience in virtual environments,  I think that working with information, ideas, and learning in 3D is something educators and librarians would do well to keep on their radar. VR is in an incunabular age, and we don’t know yet what it will look like as it takes useful forms. However, the possibilities are so compelling that I’m confident VR (or other VE) will develop into important tools for teaching, learning, and information."

No stranger to using digital platforms, Dr. Levy currently employs a variety of digital resources including Podcasting, Zoom, online office hours, and a private virtual discussion forum to maintain a sense of connection with her students throughout the week. As a result, she has received overwhelmingly positive student feedback. For Dr. Levy, this latest endeavor with “Che’s Village” is intended to find new ways to engage her students. “Technology allows us to give students who live off campus and part-time students the same quality of attention and education that a small liberal arts college could,” Levy explained.

“I can teach 300 students and make it feel like a class of 30 students because the entire medium is devised for contact,” Levy added. “The students are all on a screen, and online, everyone is in the front row – so it feels more connected. Students who would usually not raise their hands and participate in a live classroom are more inclined to speak up in an online platform. It’s convenient and an environment in which they feel like they exist, their voice matters.”

“Che’s Village” was a first-step in the iterative design process, and both Dr. Levy and Schlieski are now incorporating the feedback they received from testers to improve the VR platform.