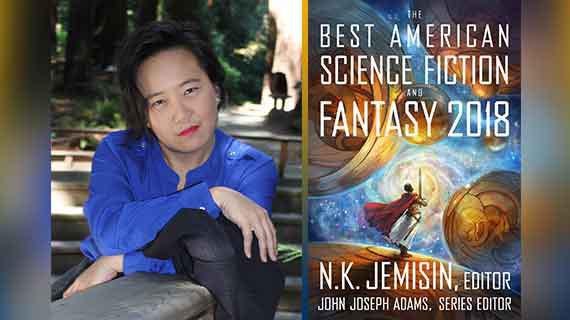 Class of 2017 alumna and author Jaymee Goh has achieved a feat that many writers hope to accomplish at the pinnacle of their careers – and she’s done it within one year of receiving her PhD from UC Riverside.

The tale begins on tomb-sweeping day, a traditional Chinese festival that occurs each spring, and focuses on a strained relationship between an Asian mother and daughter. While the traditions and nuances of Goh’s story might hold greater cultural significance for Asian readers, the relatable theme of being the disappointing child to a persnickety “tiger mom” transcends ethnicity.

Goh came to UC Riverside to pursue her doctoral research thanks in part to the enthusiasm of UCR’s Comparative Literature and Languages department faculty. To gauge their interest, she emailed the recruitment director about her proposed research topic -- post-colonialism in steampunk (a genre of science fiction characterized by design and/or fashion that blends historical elements with anachronistic technology). “I got back emails from four different professors saying, ‘Yes, we would be totally interested in this research! Come apply!’” Goh explained.

A Malaysian citizen who lived in Canada while working toward her master’s degree, when Goh first visited the campus, she was not impressed by Riverside’s public transit system. She was, however, wowed by UCR’s resources for mental health and wellness.

“I have depression, and I wanted to see what the department culture was,” Goh said. “The chair was like, ‘Oh yeah, we’ve got a great counseling center! I can walk you over there at the break if you want.’”

The Eaton Collection of Science Fiction and Fantasy also influenced Goh’s decision to attend UCR. While disappointed that she couldn’t browse through the closed Special Collections stacks, she accessed and relied on many of the collection’s resources while working on her dissertation on steampunk and whiteness. Her research is what she calls “a critical examination of whiteness and white supremacy’s effects on racial relations,” and her dissertation, Shades of Sepia: Examining Eurocentrism and Whiteness in Relation to Multiculturalism in Steampunk Iconography, Fandom, and Culture Industry, is available to the UCR community on ProQuest.

Other factors that attracted Goh to UC Riverside included professors Sherryl Vint in the English department, and Nalo Hopkinson in the Creative Writing program, both founders of the Speculative Fiction Cultures / Science Fiction & Technology Studies program.

“When I first started writing my own fiction, I kind of used Nalo Hopkinson as a model for creating narratives that centered experiences and worldviews that are usually marginalized in science fiction,” Goh said. “She was one of the first people that I talked to when I got here, and I was really excited to meet her.”

To address this on the creative front, in 2015 she co-edited an anthology, The Sea is Ours: Tales from Steampunk Southeast Asia, the first of its kind. “I wanted to talk about a steampunk that was very deeply rooted in Southeast Asian cultures, to try to reimagine worlds that either had not been colonized, or were technologically developed enough to push back against colonialism,” Goh explained. The anthology was co-edited by Singaporean writer Joyce Chng and published by Rosarium Publishing.

“Jaymee’s anthology was a revelation to me. Seeing how she had staked new ground for steampunk inspired me to ask such an early-career author to make the Eaton Collection the home for her papers,” said JJ Jacobson, the Jay Kay and Doris Klein Librarian for Science Fiction. “I knew that here was someone who was going to have a fascinating and multifaceted career in the speculative fiction world, and that we wanted to document it.”

Goh hopes that her writing might inspire more people of color, both established authors and aspiring writers, to use steampunk to explore different visions of their own identities. She added, “Because of assimilationist politics, a lot of us don’t feel safe expressing our own identities, particularly in costume play – because our cultures are not a costume and they’re already being treated as such. Part of why we fear that is because we have seen the ways that our cultures have been commodified. So I would like to see more people being comfortable rewriting their own history, the way that so many white authors feel comfortable rewriting British history, and inserting their own characters into it and not being too worried about it.”

Jaymee Goh is currently living in Berkeley, California, where she works as an editor for Tachyon Publications.