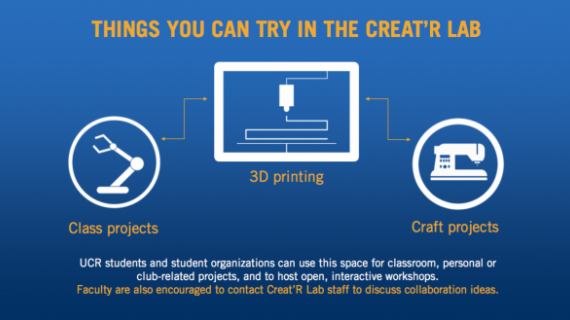 RIVERSIDE, Calif. (www.ucr.edu) — In the past year, nearly 1,300 aspiring entrepreneurs and creative types have occupied a new makerspace at the University of California, Riverside.

The space is UCR’s Creat’R Lab, set to celebrate its first Anniversary Showcase on Thursday, May 3 in the Orbach Science Library.

Users of the Creat’R Lab have spanned majors from science and engineering to medicine, from entrepreneurship to arts and humanities. In the lab, they have created projects including foam-sculpted costume armor, stop-motion animation videos, business plans, and short video pitches for investors.

In 12 months, the Creat’R Lab has hosted 187 workshops on a wide variety of topics led by student organizations. The lab has also provided space for RED entrepreneurs-in-residence to mentor UCR students in the NSF I-Corps Startups for Innovators program.

On May 3, several student groups will display projects made in the Creat’R Lab, including the Institute of Electrical and Electronics Engineers (IEEE) student branch at UCR, Cross Campus Entrepreneurs, Studio Riverside, Cosplay Brigade, and the Origami Club.

Creat’R Lab staff will give demonstrations in virtual reality with the Oculus Rift headset and will show visitors how to build objects using electronic building blocks. Others staff will lead crafts in which guests can make a button and a Scotty the Bear necklace.

“Having the Creat’R Lab in the UCR Library creates opportunities that wouldn’t exist if it were embedded elsewhere,” said University Librarian Steve Mandeville-Gamble. “It’s a campuswide resource that students can use even when they’re not enrolled in classes.”

The UCR Library and the Office of Research and Economic Development (RED) launched Creat’R Lab in April 2017. It was conceived as a hands-on learning space where students can collaborate across academic disciplines.

At the Creat’R Lab Anniversary Showcase, Deputy University Librarian Ann Frenkel and Director of Entrepreneurship for RED Michalis Faloutsos will provide welcome remarks. UCR students Alondra Gomez-Andrade, Christopher Fleming, and Gustavo Correa will participate in a panel discussion about how student organizations use the Creat’R Lab.

Research staff and faculty members Christodoulos Kyriakopoulos and Mzilikazi Kone will share examples from their own research, including 3D-printed earthquake fault models and a collaborative zines project for two ethnic studies classes.

The Anniversary Showcase will take place on Thursday, May 3 from 4-6 p.m. at Orbach Science Library. Light refreshments will be served.

Those interested in attending are encouraged to RSVP: https://creatrlab-anniversary.eventbrite.com