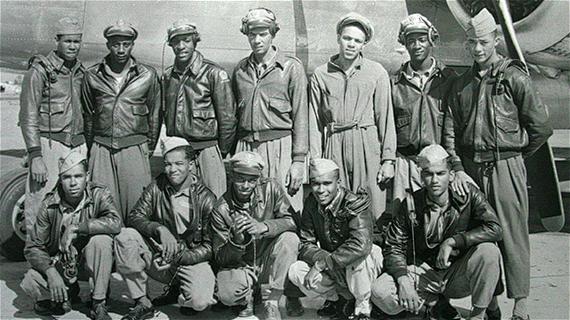 A display highlighting selected items from the personal archival collection of Arthur C. Harmon and his career as a Tuskegee Airman is set to open on June 6 in UCR Library's Special Collections Department.

Community members can visit the display on the fourth floor of Tomas Rivera Library in the Special Collections Reading Room Mondays through Fridays between the hours of 11:00 a.m. and 4:00 p.m. until August 3.

Born in Topeka, Kansas on June 26, 1925, Harmon was raised in Los Angeles, California, where as young child he became captivated by aviation through radio programs such as the Air Adventures of Jimmie Allen and model airplane building.

In 1943, Harmon decided to pursue his childhood dream of becoming a pilot by joining the United States Army Air Corps. He trained at the Tuskegee Army Air Field and graduated from class TE-45-G as a Second Lieutenant on October 16, 1945. While this group never saw action in World War II as Japan surrendered before their training was completed, Harmon maintained a lifelong commitment to the organization.

Following his discharge from the US Air Force, Harmon pursued his other lifelong interest while studying music at what is now Pepperdine University.

Recalled to the USAF in 1951, Harmon continued his career in the military with assignments to the Strategic Air Command, Alaskan Air Command, and in the Major Air Command Aircraft Accident Prevention of the 4500th Air Base Wing before retiring in 1968 as a Lieutenant Colonel in the United States Air Force Reserve.

In his honor, in 2008 a soil exposure on Mars was named after Harmon and investigated by the Mars Exploration Rover, Spirit, as a target of scientific interest.

Other materials belonging to Harmon, such as his personal Bible with its metal jacket, his flying helmet, his survival kit and his dog tag chain can be viewed and enjoyed in the permanent Tuskegee Airman exhibition in the Rivera Library first floor reception area.

Additional information regarding the Arthur C. Harmon papers can be found here in the Online Archive of California.