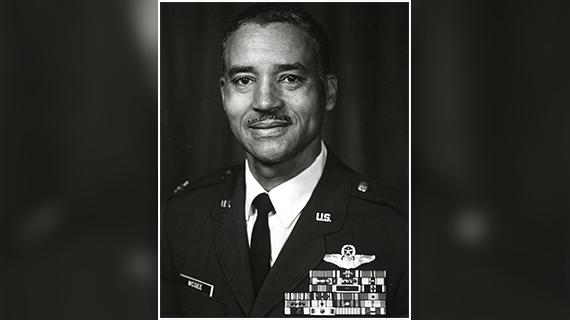 One of only nine living Tuskegee Airmen, retired United States Air Force Colonel Charles McGee has kicked off 2020 with fanfare befitting a centenarian.

On Feb. 2, he presented the coin for the on-field coin toss for Superbowl LIV at the Hard Rock Stadium in Miami, FL, along with three other 100-year-old World War II veterans. The NFL ceremony acknowledged the 75th anniversary of the end of World War II and celebrated 100 years of professional football.

During the 2020 State of the Union address on Feb. 4, the U.S. President recognized McGee, announcing his recent honorary promotion to Brigadier General. McGee saluted as the audience gave two standing ovations while 13-year-old Iain Lanphier stood beside his great-grandfather, smiling proudly up at his hero and inspiration. Lanphier hopes to join the U.S. Space Force, the newest branch of the Armed Forces, inspired by McGee’s achievements.

His noteworthy life and military career are represented in the Charles E. McGee papers (MS 272), which are available at the UCR Library in Special Collections and University Archives on the fourth floor of the Tomás Rivera Library. McGee donated his collection of military documents, administrative records, photographs and artifacts to the UCR Library in 2015. A small portion of the collection has been digitized and made available online through Calisphere. “We are currently in the process of completing the digitization,” said Tiffany Moxham, Assistant University Librarian for Content and Discovery. “It should be up before summer.”

In his 30 years of military service, he flew 409 aerial fighter combat missions, including service in WWII, the Korean War, and the Vietnam War -- one of the highest counts recorded by any Air Force fighter pilot. McGee retired from active duty in 1973 with many service awards.

Additionally, in 2007 President Bush and the U.S. Congress awarded the nation’s highest civilian award, the Congressional Gold Medal, to McGee and all other Tuskegee Airmen, both living and deceased. In 2011, McGee was inducted into the National Aviation Hall of Fame in Dayton, Ohio. George Lucas consulted McGee for his 2012 feature film Red Tails, named after the distinctive markings of the Tuskegee Airmen’s aircraft. McGee also earned the Eagle Scout award from the Boy Scouts of America in 1940.