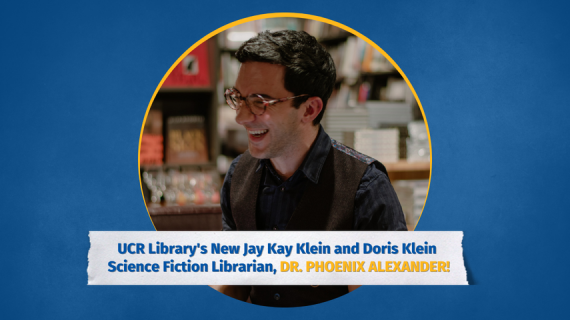 As the Jay Kay Klein and Doris Klein Science Fiction Librarian, Dr. Alexander will be responsible for the development, stewardship, and promotion of the Eaton Collection of Science Fiction and Fantasy — one of the world's largest, richest, and deepest collections of science fiction, fantasy, horror, utopian literature, and related genres.

Dr. Alexander currently serves as the Science Fiction Collections Librarian at the University of Liverpool, Special Collections and Archives where he manages the largest collection of cataloged science fiction in Europe.

Prior to his work at the University of Liverpool, Phoenix completed his Ph.D. in the departments of English and African American Studies at Yale and worked as a curatorial assistant at Yale’s Beinecke Rare Book and Manuscript Library for three years, alongside his studies.

Dr. Alexander’s demonstrated expertise and passion for science fiction, as well as his commitment to social justice and including marginalized communities in his work, complements, and will continue to advance, the UCR Library’s commitment to diversity, equity, and inclusion through the Eaton Collection.

We invite the UCR community to join us in welcoming Phoenix to UCR when he arrives on August 1!