Footsteps to You exhibition hopes to inspire empathy and discourse 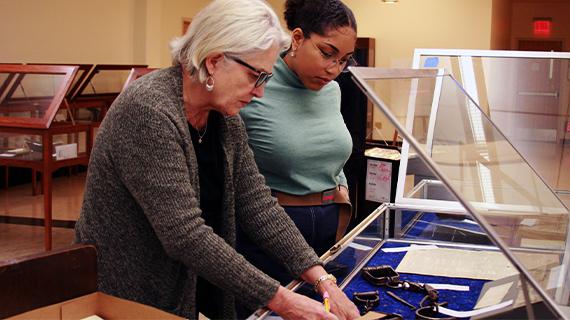 Empathy and the power of choice: those are two things that the Footsteps to You – Chattel Slavery exhibition hopes to inspire.

Footsteps to You – Chattel Slavery will open on Tuesday, Jan. 16, 2018 in Special Collections and University Archives, located on the fourth floor of Tomás Rivera Library. Curated by Jordan Brown, Class of 2019 History major and Mellon Fellow with the Curatorial Studies program at Spelman College, this exhibition will be presented at UC Riverside by the Black Voice Foundation with the Gore Collection.

The collection featured in this exhibition was entrusted to the Black Voice Foundation by the Estate of Jerry Gore. Gore was a respected historian who developed a national reputation through his work and personal collection efforts, which focused on the history of enslavement and abolition in the Maysville, Kentucky metropolitan region.

The exhibition showcases primary resources and implements of slavery that date back to the 1800s. Some materials featured tell the story of a group of black and white people who decided that slavery was wrong and worked together to change the system. “The Lincoln-Douglas Debates are highly relevant to the current political climate,” Brown commented. “We have the same dialogue going on today.”

Gore was not a man of tremendous means, but he devoted every spare dollar he had to acquiring these artifacts, according to Dr. Paulette Brown-Hinds, Publisher of The Black Voice News and Steward of the Gore Collection for the Black Voice Foundation.

“Jerry felt like he had a special responsibility to keep it, and then impart it to those of us who he knew would go out and teach, as well,” Dr. Brown-Hinds said. For that reason, she considered Gore a “griot,” a West African term that means “keeper of the culture.” She added, “It’s important that we partner with institutions like the UCR Library to show it to a wider audience.”

The Black Voice Foundation originally connected with Gore through their “Footsteps to Freedom” tour. “The tour started because a teacher in a local district was teaching her students that slavery was good for the slaves, that it civilized them,” Dr. Brown-Hinds explained. “Today, we hear the same ignorant rhetoric coming from people with a larger platform.”

More than 1,500 educators have participated in the tour over the past 20 years. “When they go on this tour – something changes in them. They have to do something in their community,” said Brown. “When they walk out, it’s on them whether they want to continue to teach the way they were taught or whether they’re going to teach differently.”

Brown hopes that seeing these rare materials will open up a discourse between attendees. “I don’t want people to feel blame when they come in,” he said. “When they see these artifacts, it’s not just show-and-tell. It’s a conversation. The whole piece together really hinges on empathy and understanding other people. Our whole country was founded on freedom, but we had this whole population of people who weren’t free.”

“In 100 years, what do you want history to say about you? Were you on the right side – or the wrong side – of history?” he asked. “Even if something doesn’t affect you, are you willing to stand up and fight?”