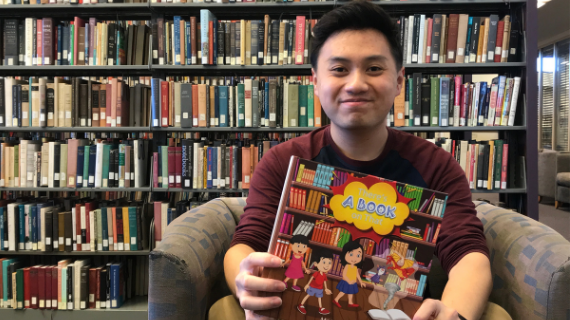 When Class of 2019 alumnus Matthew Diep first enrolled at UC Riverside to double-major in accounting and public policy, becoming a children's book author was not on his to-do list.

However, a missed opportunity in another campus department led him to apply for a student employee position at the UCR Library, which became the catalyst for a huge shift in Diep’s career and life plans.

“My whole life would have been different if I had gotten that first job,” Diep reflected. “When I was a senior at UCR, my dad passed away. The library was always there for me. They were so supportive. Books were always there for me. You know, books get me through everything.”

In January 2021, Diep self-published his first children’s book (under the pseudonym Matthew Dee) titled, “There’s a Book on That,” which is currently sold through Amazon, Barnes and Noble, and Book Depository. In his book, Diep wanted to show his young readers all the wonders that books in libraries have to offer.

“When I was a kid, I despised reading,” he admitted. “But the one thing that I did like to read was books that rhymed.” Diep eventually learned to love reading and began writing poems during high school, so he knew that he could rhyme, but he had never written anything like this.

After writing the manuscript last year, Diep saved it in his Google docs and promptly forgot about it. “Then this winter break, I got bored,” he said, which is why he decided to self-publish.

Throughout all 4 years of his undergraduate studies, Diep found himself feeling “miserable but practical” about his decision to focus on accounting. “Toward the end of senior year, I reflected on what would make me happy and what would I enjoy, and I knew I enjoyed working at the library. So I decided to totally switch my career path.” He applied for a Masters program in Library and Information Sciences (MLIS) at San Jose State, and hopes to complete his degree within two years.

He is currently employed part-time with the City of Ontario Library and full-time with the University of Redlands Library, where he supervises student employees in the Access Services department. This reminds him of his former supervisor: “Leslie [Settle] is someone I always think about because she was a great supervisor and she was always there for her students, and that’s what I aspire to be for my students.”

Upon completion of his MLIS, Diep hopes to work in an academic library, perhaps at his alma mater. He has ideas for more children’s books, as well. In the meantime, he is focused on marketing his first book and getting it onto the shelves of as many libraries as possible. “I do want to see it with the little call number and everything,” he said.

Diep's endeavors have been met with overwhelming support from his family and friends on social media, though interested libraries should move quickly, he said. “The hard copy is already out-of-stock on Amazon.”

Fortunately, the UCR Library has already ordered a copy of “There’s a Book on That,” which will soon sit proudly alongside its counterparts in the library's juvenile collection.