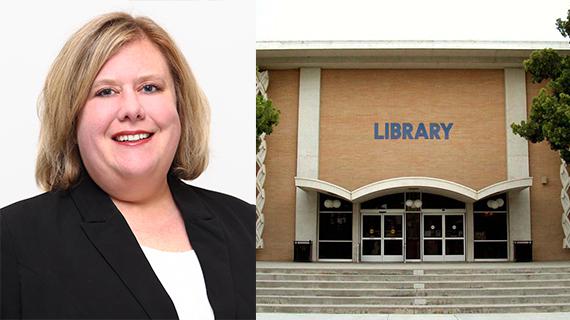 “While working at UCR, I was inspired by the work the librarians and other library professionals did and decided I wanted to apply to school to be awarded a MLIS,” Christmas said. “The experiences at UCR were incredibly important to me and give me a fuller understanding of the role library’s play for students in academic settings and the public at large.”

In her 10 months as Riverside’s Interim Library Director, Christmas led the 2018 Riverside Reads campaign, the Toy Lending Library project and the CENIC upgrade projects, which greatly increased internet speeds at the Riverside Public Library. These projects are part of her effort to increase public offerings and expand the library’s community impact.

A leader with more than 10 years of professional library experience in California, Christmas has extensive knowledge in library management, a positive attitude, and a talent for collaborating with fellow city department heads. These assets will serve her well while working toward the creation of a new Main Library for the City of Riverside and continuing the tradition of excellence at the library branches across the city.

“Erin Christmas has proven herself to be a tireless advocate of how the library system in Riverside can change lives,” said Riverside Mayor Rusty Bailey. “She understands that the library is an incredible resource for young people starting their educations to adults trying to get back into the workforce.”

Christmas holds a Bachelor of Arts in Politics from Occidental College and a Master’s degree in Library Information Science from San Jose State University.