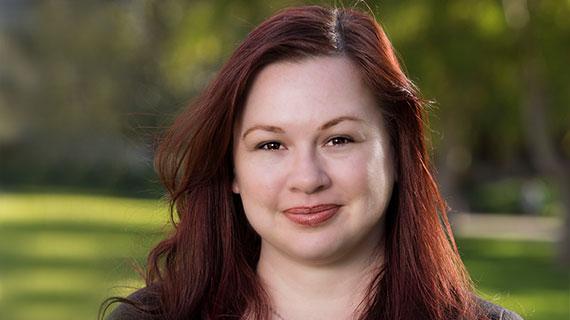 From student staff member to president of the UC librarians’ association, from reserves coordinator to collection strategist for STEM, Carla Arbagey has run the gamut of roles that a library staff member might hold during a career – and she’s just getting started.

In March 2002, Arbagey began working at the UCR Library as a student assistant in the Orbach Science Library’s Reserves department and transitioned to part-time career staff eight months later.

Arbagey was grateful that her supervisor at the time, Circulation / Reserves Services Manager Sahra Missaghieh-Klawitter, was willing to schedule work hours around her class schedule. She graduated with UC Riverside’s class of 2004 with her B.A. and then completed her Master of Arts degree in 2006, both in art history.

After graduation, she remained with UCR Library. She saw a connection between libraries and art history that most people might not notice.

“Most large museums like the Getty and LACMA also have large research libraries where people come to do research,” she explained. “So being involved and interested in culture, cultural history and the preservation of knowledge fits in well with libraries.”

Opportunities for continued career growth kept Arbagey at UCR, and eventually she decided to pursue her Master of Library and Information Science (MLIS) degree from San Jose State University. She is now UCR Library’s Collection Strategist for Science, Technology, Engineering, and Mathematics (STEM).

As a UC librarian, she is a member of the Librarians Association of the University of California (LAUC) and has served as Chair of LAUC Riverside (LAUC-R), as well as chair of local and system-wide Diversity Committees.

In September 2017, Arbagey was elected as the statewide President of LAUC for a one-year term that will conclude in September 2018.

“I think it’s helped me to develop a lot of my professional skills in terms of planning, leadership and developing a vision, and seeing the bigger picture,” Arbagey said of her LAUC service. “We’re all interconnected, like one big library for UC.”

As LAUC President, Arbagey has appreciated many opportunities for advocacy. She has spoken on behalf of librarians at the fourth hearing of the State Assembly Select Committee on the Master Plan for Higher Education, which was held at UC Riverside, at the UC Regents’ May 2018 meeting, and she presided at the LAUC Annual Assembly on March 23, 2018 honoring the 150th anniversary of the UC Charter.

In her role at UCR Library, Arbagey enjoys how much her work employs technology to expand knowledge and improve skills. “Here there’s really a conscious effort to keep up with that,” she said. “It’s great to have the tools to support learning.”

One of Arbagey’s favorite memories is connected with one of her biggest dreams for the library: having more textbooks available and research materials available, including open educational resources.

She recalled a week in May 2011 when Chancellor Emeritus Tim White worked as a circulation desk assistant at Orbach Library for Undercover Boss. “They fooled us so bad! I had no idea what was going on,” she laughed.

During the library’s segment of the show, White assisted students who were requesting textbooks on reserve. “The library copy was in a bad condition because those books can check out up to 500 times in a ten-week period,” Arbagey explained. “Then another student came up who couldn’t get the book because it was already checked out. I was in charge of reserves back then and I was in tears watching that segment.”

White allocated some additional funding to the library for course reserves after that segment, but the challenge persists, according to Arbagey.

“It’s still a problem to provide access for our unique student body, many of whom are unable to purchase all the textbooks needed for their classes,” she said. “One of the principles for librarianship is equitable access to information. It’s a way as librarians we can make things more equitable.”

Arbagey is excited by the Affordable Course Materials Initiative, a program coordinated by Director of Teaching and Learning Dani Brecher Cook as well as faculty and Information Technology Solutions (ITS) partners, to promote the number of available high-quality course-related open educational resources on campus.