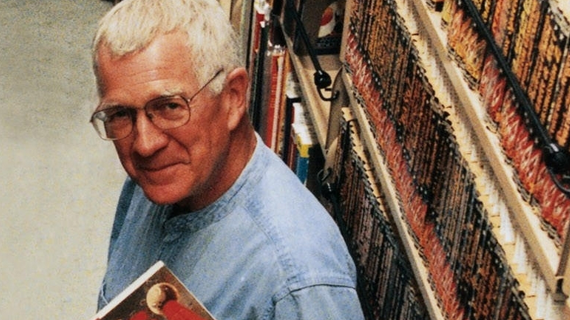 RIVERSIDE, Calif. — George Edgar Slusser, whose determination to develop the study of science fiction as an academic discipline led to the growth in size, scope and international reputation of UC Riverside’s Eaton Collection of Science Fiction & Fantasy, died November 4th at his home in Highland, California. He was 75.

Dr. Slusser, curator emeritus of the Eaton Collection and professor emeritus of comparative literature, joined the UCR Library in 1979 and, beginning in 1991, held a joint position as professor of comparative literature until his retirement in 2005. Under his leadership the collection – formally known as the J. Lloyd Eaton Collection of Science Fiction, Fantasy, Horror, and Utopian Literature – grew from 7,500 volumes to the internationally renowned collection it is today, a collection that includes books, journals, fanzines, comic books, authors’ manuscripts, media and memorabilia. He taught the first courses in science fiction studies at UCR and originated the Eaton Conference, which he chaired for more than 20 years. The conference drew — and still draws — scholars from around the world

“Over three decades, George Slusser built the Eaton Collection up from a small core of titles into the world-class archive that it is today,” Latham said. “The field of science fiction scholarship owes him an incalculable debt.”

Science fiction author and UC Irvine astrophysicist Gregory Benford described Professor Slusser as “a fine man, insightful critic, innovative educator, buoyant spirit. His criticism deeply emerged from his own vast knowledge of science fiction in several languages, uniquely in the field. Without George, Eaton would not remotely approach its present importance in the literary world.”

Howard Hendrix, a Science Fiction author who earned his Ph.D. from UC Riverside, called Slusser a mentor and friend. “George Slusser showed me that science fiction is worthy of serious intellectual study, and his example encouraged my own work as both a science fiction critic and science fiction writer,” he said.

“George was a true and loyal friend of many, a lover of life, and a lover of the life of the mind,” added SciFi author and scholar Eric Rabkin. “All conversations with George shone with his belief that everything had deeper meanings, significance, and the capacity to bring us wonder. Science fiction was a fit genre for him, and a genre whose worth he demonstrated continuously in the collection he guided to preeminence, the people he helped, and the powerful body of criticism he produced. He was a generous and important collaborator in ways small and large for so many of the people in his chosen field. I am honored to be among them.”

Dr. Slusser, a San Francisco native, earned a bachelor’s degree from UC Berkeley, his Diplôme d’Études Françaises from the Université of Poitiers, and his Ph.D. in comparative literature from Harvard University, where he wrote his dissertation on E.T.A. Hoffman, a 19th century German Romantic author of fantasy and horror.

He was widely known for his scholarship in the field of science fiction, writing or editing nearly 40 books and more than 100 articles. In 1986 he received the Pilgrim Award, presented by the Science Fiction Research Association for lifetime achievement in the field of science fiction scholarship. He also was the recipient of the Harvard Traveling Fellowship and Fulbright Awards to Germany and France. He also received the Edward A. Dickson Emeritus/a Professorship Award from UCR to support research by emeritus faculty.

Among the scholarly books he wrote or edited were “Robert A. Heinlein: Stranger in His Own Land,” “The Farthest Shores of Ursula K. LeGuin,” “The Bradbury Chronicles,” “Harlan Ellison: Unrepentant Harlequin,” “The Space Odysseys of Arthur C. Clarke,” and “The Delany Intersection: Samuel R. Delany Considered as a Writer of Semi-Precious Words.”

He and his wife, Danièle Châtelain-Slusser, an associate professor of French at the University of Redlands, co-authored several books, including “Three Science Fiction Novellas: From Prehistory to the End of Mankind,” a 2012 translation of three novellas by Belgian science fiction writer J.H. Rosny aîné (1856-1940). The book included an introductory essay that explains the writer’s place in the science fiction canon and within the context of evolutionary biology. They also published a well-received translation and study of Balzac’s “The Centenarian.”

In a 2000 interview published in UCR’s magazine — then known as Fiat Lux — Professor Slusser described the significance of science fiction literature and the Eaton Collection in particular.

“Science fiction is the natural bridge between things scientific and things artistic,” he said. “On these shelves are treasures for scholars in the ancient sciences, art history, religious mythology. … (Science fiction) is the one real international literary form we have today, and as such has branched out to visual media, interactive media and on to whatever new media the world will invent in the 21st century. Crossover issues between the sciences and the humanities are crucial for the century to come.”

Robert Heath, UCR professor emeritus of plant physiology and biophysics and a longtime friend, co-taught an undergraduate Honors seminar in science fiction with Slusser that focused on both the scientific and literary aspects of time travel, aliens and robotics. “He often was outspoken about the need for SF studies and felt that he was ‘a Stranger in a Strange Land’ in that he was fighting the classical ways of thinking about science and humanities,” Heath said. “He never gave up, however, and today UCR is moving vigorously in the direction where he was pointing for so long.”

Professor Slusser is survived by his wife, Danièle Chatelain-Slusser. No arrangements have been made.