Getting your Geek On in the Creat’R Lab 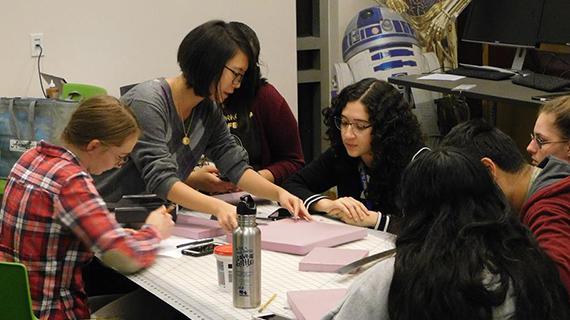 When the Creat’R Lab first opened its doors in April 2017, it was touted as a space for creative collaboration between students and faculty from all different disciplines.

Members of UCR’s student Cosplay Brigade have spent the past year doing precisely that as they've been preparing for the second annual Geek On event, which will take place May 6, 2018 at UCR's Highlander Union Building (HUB). Cosplay is an activity in which participants dress up or wear accessories to represent specific characters or genres.

Cosplay Brigade president Yan “Winnie” Lai was ecstatic when she found out that the Creat’R Lab was open to non-engineering students. “We got so excited because nobody ever listens to us, nobody ever helped us,” explained Lai, a History major. “The library was the first place on campus to listen to us.”

Creat’R Lab has hosted Cosplay Brigade workshops each month on topics ranging from foam fabrication, sewing, costume and prop making, and more. They plan to showcase many of this year’s creations at the Creat’R Lab Anniversary Showcase on Thursday, May 3, and also at Geek On.

Economics major Robert Garcia of the Secret Sword & Sorcery Society was excited that 3D printing was made available to non-engineering majors as members of his club prepared for Geek On. “Miniatures are what we use as a table-top role-playing organization. Each person has a mini representing their character and we can start using the Creat’R Lab to make our own. And lots of other clubs would be interested in learning how to do 3D modeling, 3D printing.”

“Geek Union could work more closely with the Creat’R Lab. Other, bigger clubs like IEEE have their own room, but since we don’t, it could help a lot,” explained John Berba, a recent graduate in Political Science and International Affairs and member of the Greenwood Film Society (Anime Club).

The collaborators also view Geek On as an excellent way to entice prospective students to choose UCR. “When you see something that you really like and that there’s a club that’s specifically dedicated to that, you get really excited about that,” Lai explained.

Fellow Cosplay Brigade member and Bioengineering major Jocelyn “Josh” Kiyama agreed, “I remember coming into orientation and Highlander Day, and when I found these clubs, I felt like, ‘Why didn’t I find them sooner?’”

Lai concluded, “Maybe with the library’s example, we can convince other campus organizations to throw us a bone and let us run some of the things that we’re passionate about. These events have the potential to get so big that UCR could become known for it.”

Registration is open for the Creat’R Lab Anniversary Showcase and also for Geek On. Both events are free to attend.