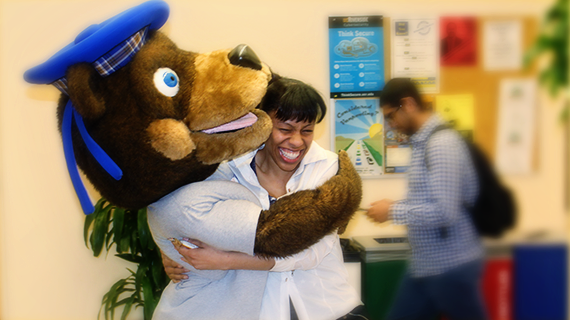 The holiday season tends to inspire a spirit of giving and goodwill. Access Services Desk Supervisor Leslie Settle has discovered a way to extend that magnanimous feeling throughout the whole year.

It began five years ago, when Leslie first heard about the Guardian Scholars Program during a Staff Assembly. “I recognized one of the students in their advertisement photo as someone who comes to the front desk all the time,” Leslie explained.

Connecting a familiar face to the mission of Guardian Scholars is what inspired Leslie to make a monthly donation to the program via payroll deduction. “When I was a student here, I never knew that UCR did this,” Leslie said. An alumna of UC Riverside (class of 2006, B.A. in Political Science and Ethnic Studies, and 2009, M.A. in Public Administration), Leslie understands well the demands of student life.

Learning about what the Guardian Scholars Program does was eye-opening in many ways for Leslie. “I didn’t know that kids in the foster system get completely cut off when they turn 18, so it’s like becoming homeless all over again,” she explained. “I thought to myself, ‘That isn’t right and I must help.’ A lot of these scholars are young, single parents, and they’re trying to go to school and take care of their family at the same time. I remember as a student having no home to go home to, since my mother was homeless. And now that I’ve been blessed, I want to help by blessing others.”

“The Guardian Scholars Program provides housing for them, it gives them school supplies, and money for things like going to the movies with their kids,” Leslie continued. “Some of the Guardian Scholars will write a personal thank-you note and send it to your house. Some will even send you pictures of their kids. It’s very sweet.”

“Guardian Scholars is among a few of the popular, ‘feel good’ programs that UCR staff and faculty can donate to,” explained Lily Barger, Director of Annual Giving. Lily stated that others include R’Pantry, Scholarship Assistance, the Living the Promise fund, and R’Garden.

“The R’Garden is a great link between the community and the university,” said Lily. “People who live in Riverside can get a plot in the garden. Food grown there goes to the families, to the UCR Food Pantry, and to a few local food pantries, as well.”

“It blesses me to give because I love helping people. I know without help, I would not be where I am today,” Leslie explained. “I felt like I could do more, so I told some coworkers about Guardian Scholars. A few others signed up to give, too, because of what I had shared, which was great to see. And giving to UCR is so easy – one form to fill out, and you never have to think about it again.” In addition to giving to the Guardian Scholars Program, Leslie also donates each month to Society 54, which supports the UC Riverside Staff Assembly.

If you feel inspired by Leslie’s story, there are many programs that could use your support. You can learn more about the different ways to give to UCR, or speak with any member at UCR’s Office of Development to learn about how to participate in the Faculty and Staff Giving Campaign.

“The library would be thrilled to be a leader on campus, not only in our services, but also in our sense of community, spirit, and campus-wide support,” said Samantha Lang, Director of Development for Campus-wide Initiatives, “The library would love to achieve 100% participation in the Faculty and Staff Giving Campaign, which is part of UCR’s Living the Promise Comprehensive Campaign. And ‘participation’ can be a simple, one-time $25 donation to anywhere on campus, not just the library.”

An added bonus is that each donation counts as a charitable deduction come tax season. “This is a great alternative to giving just at the end of the year,” Leslie explained. “If everybody who works at UCR gave a little each month, we could raise millions of dollars each year.”