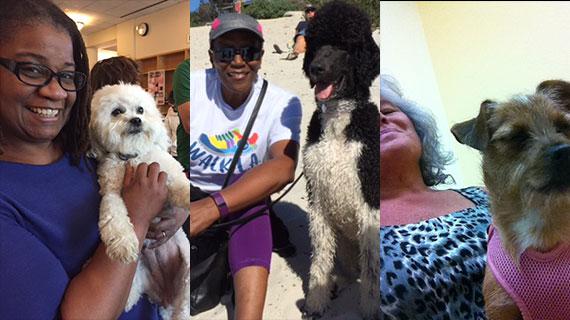 On Feb. 5, a team of library employees received a UCR Healthy Campus Initiative grant for a project proposal, #puppylove: a feasibility study for an on-site, year-round animal therapy program for the UCR campus community.

Their project will conduct a year-long feasibility study to determine whether creating an on-site, year-round therapy dog service at UC Riverside would improve the emotional, mental, physical, and spiritual well-being of the entire UCR campus community.

#puppylove would differ from current Library programming in which therapy dogs visit campus once per quarter as part of the Finals Week Stress Relief events provided for students. However, its enduring popularity makes a great foundation for this research, according to project lead Patricia Smith-Hunt, Head of Preservation Services.

“Institutions like UC Berkeley and Harvard and USC have implemented programs like this,” Smith-Hunt said, who drew inspiration for #pupppylove from the therapeutic benefits she gained by acquiring a dog last year. “We as staff and faculty also have stressful days, so having access to that kind of unconditional love and interaction on a regular basis rather than just once per quarter – and having it open to everyone on campus – that would be the goal of the study.”

She shared this idea with library colleagues Financial and Acquisition Analyst Jacqueline Bates and Serials Assistant Andi Newman, who shared her excitement for the concept and helped to complete the grant application.

After the grant recipients were announced on Feb. 7 in Inside UCR, colleagues from other UCR departments reached out to the team to ask how they could get involved.

Newman observed students interacting with the therapy dogs during Finals Week Stress Relief. “I was really surprised. Even with all these students surrounding them, the dogs remained calm, they were playing with the students, doing tricks, and allowing a number of people to pet them. The dogs loved it!” she said. “I myself was able to spend about 10 minutes holding, petting and just getting unconditional doggie love. After that, I went back to my desk and I truly felt better, all from being with a dog.”

“If I’ve had a really stressful day and I walk in my door and see my three dogs – whether they’re jumping on me or not – I feel better,” Bates commented. “I think everybody should have that opportunity because a lot of people can’t own dogs.”

The feasibility study will conclude in December 2018, and the team hopes that their research data will inspire the Healthy Campus Initiative review committee to implement the #puppylove program on a permanent basis.