Home / About / News / How one librarian inspired this Highlander's career path

How one librarian inspired this Highlander's career path 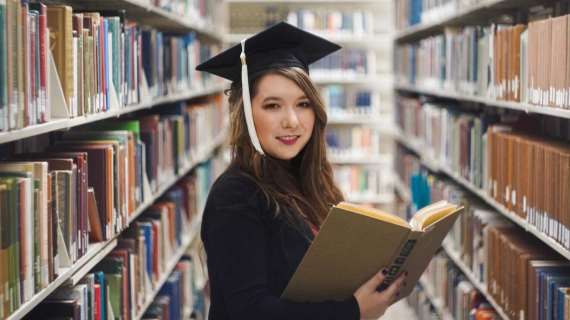 A Latin American history major, Valencia often visited Special Collections and University Archives (SCUA) for a history course with Professor Juliette Levy. While in SCUA, she met Robin Katz, Arts and Humanities Teaching Librarian, who led a teaching seminar for Levy. (At the time, Katz was the Outreach and Public Services Librarian for SCUA.)

Katz’s enthusiasm for teaching and learning with primary sources made a strong impression. Valencia explained, “Her expression of joy to share that information with us, and our joy of receiving it was an entirely new experience for me. Seeing someone so happy, so charismatic, and having so much fun teaching students how to handle these documents, I realized that I wanted to be in that kind of position one day.”

So, Valencia asked Katz, “How do I become you?”

Katz replied, “You’ll have to get your MLIS (Master of Library and Information Science).”

After graduating from UC Riverside in 2016, Valencia enrolled at San Jose State, where she completed her MLIS in 2019.

Until that day, Valencia had thought she wanted to become an elementary teacher. “For some reason, my perspective on education and teaching was that it was only something you could do with a large age gap,” Valencia explained. “I never realized until that moment that you could be an adult teaching other adults or young adults something that they are passionate about. Being that source of information for them, and having a slightly more equitable sharing of knowledge.”

A Corona native and only child, Valencia’s parents presented her with two choices for college: UCR or Cal State Fullerton. “I really wanted to go to UCR because I’m a life-long Riverside resident. I plan on staying in Riverside long term. It’s my home, and UC Riverside was the obvious choice.”

Valencia now works as the Reference and Instruction Librarian at the Riverside County Law Library. She has been working in libraries for nearly five years now.

Upon learning of her impact on Valencia’s life path, Katz said, “It’s an honor and a privilege to get to help UCR students forge their academic and post-college careers! I am always happy to speak to anyone interested in librarianship, archives, museums, and related cultural heritage professions.”

To Katz, Valencia would say, “Thank you for presenting this job opportunity for me, this path in life that I never would have considered. As many other students, I was like, ‘What’s next? What am I going to do after I graduate?’ Growing up and going into college, thinking you want to be a librarian is not so common.”

Valencia encouraged her fellow Highlanders to learn about libraries in different settings, the Library Bill of Rights, and libraries’ commitment to the freedom of information. “Libraries are an integral part of society. Your local library, they want to meet you, they want you to come, they want you to talk to them. We’re sitting there waiting for the next person to come in because we're so excited.”

Still early in her career, Valencia is excited to see where this path takes her. “I’m using this period of my life to learn as much as I can, to find as many mentors as possible, and to go to as many conferences as possible. I just presented at CLA for the first time last year, so this is a growth and learning period for me and I really hope that in five years, I’m ready to be in the next place where I’m ready to be at home more permanently. The dream is obviously to go back to UCR.”

For UCR’s current students, Valencia shared this advice: “Don’t be so set or worried that you have to decide your future at such a young age, because ultimately your future is unfolding before you in ways that you can’t expect. It’s not like reading your story and you don’t know the end. You’re not supposed to know where you end up when you’re starting the story! You’re supposed to be flipping page by page, experience by experience, person by person, and end up where you’re supposed to end up by fate, or whatever you want to call it. Ultimately, that’s how I feel the UCR Library impacted my life. The people I met, the experiences I had there, and the time that I spent there ultimately changed my story, unfolded it in the way it was supposed to, and led me to a very fulfilling career that not many people know of.”