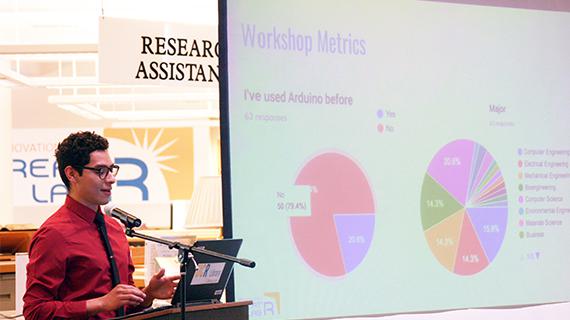 “One year after launch, we have been blown away by the energy, talent, and sheer diversity of projects displayed in the Creat’R Lab,” said Ann Frenkel, Deputy University Librarian.

On the evening of Thursday, May 3, Orbach Science Library hosted more than 90 guests who came to celebrate those successes and enjoy some birthday cake at the Creat’R Lab Anniversary Showcase.

In talking about the genesis for the Creat’R Lab, Frenkel remembered, “Our students kept emphasizing that there was no other independent, inclusive space on campus devoted to project making. They also wanted a place that would allow collaborators to find each other — to put artists together with engineers, social scientists, and scientists.”

So the UCR Library, in partnership with the Office of Research and Economic Development (RED), turned this vision into the Creat’R Lab, a living, state-of-the-art technology incubator for discovery, innovation, and entrepreneurship.

Professors and students alike now call the Creat’R Lab “home” because it fosters experimentation and teamwork, according to Michalis Faloutsos, Director of Entrepreneurship at RED. “It’s also hosting some entrepreneurial activities of EPIC,” he said, referring to UC Riverside’s Entrepreneurial Proof of Concept and Innovation Center.

The showcase featured success stories from several Creat’R Lab users, including third-year Electrical Engineering student Gustavo Correa, whose Arduino electronics and programming workshops had such a high turnout that he had to move attendees to a larger room in Orbach Library to accommodate the class size.

Gender and sexuality studies professor Mzilikazi Koné described how her class collaborated with the Creat’R Lab on their zines project (hand-made magazines). “Zines are the ultimate project of creating something tactile, something you can pick up and pass around and marvel at,” Koné explained. “Zines center art and creativity as central to the project of learning – not as a side note. It is the front note.”

“My interaction with the Creat’R Lab generated a new world of amazing opportunities,” said earth sciences professor Christodoulos Kyriakopoulos of his project, which involved a 3D-printed model and a planned Virtual Reality model of California’s earthquake faults.

“I can’t overstate how excited we are for this new committee and the input and fresh ideas they’ll be bringing to the lab!” Marshall said.