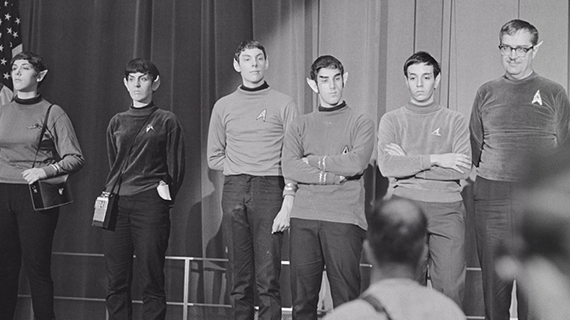 When Calisphere released the online gallery of 5,933 recently digitized photos from the Jay Kay Klein photographs and papers on science fiction fandom last week, the UCR Library’s team was thrilled with the rapid response of the science fiction fan community.

Within 15 hours of publication, chats about the images lit up fan blogs, including Mike Glyer’s site, File770.

A science fiction fan, Klein photographed many events during the 1960s and 1970s, including “Worldcon.” Klein donated these photographs, which were part of his $3.5 million estate, to the UCR Library in 2014.

“We’re a large but tight-knit community and we love our history,” said David M. Stein. “Since this archive went live, we've been pointing out images, lots of ‘OH MY, that's <so-and-so>,’ and ‘Hey Anne, were you ever THAT young?’”

Some fans were understandably frustrated that individuals were misidentified in some of the picture captions, but the overwhelming majority were delighted as they found many familiar faces and fond memories among the sea of photos.

Library staff received emails from many fans, graciously offering to provide additional information about the people and events pictured “before all those who attended the conventions have shuffled off this mortal coil,” as Maggie Thompson so aptly stated.

“NYCon III was my first world convention,” wrote John-Henri Holmberg. “I'm amused to more or less recognize my youthful self in a few of Jay Kay Klein's photos.”

JJ Jacobson, the Jay Kay and Doris Klein Librarian for Science Fiction, has had many conversations with fans about the photos since the gallery went up on Calisphere. “We knew there were flaws,” she commented. “We also knew it would be possible to crowdsource, but we had no idea that the SF community would be so magnificently generous. We weren’t ready for the flood, but we’re ecstatic that it’s happening.”

To give perspective on the “flood,” Digital Initiatives Program Manager Eric Milenkiewicz shared these statistics:  In the last week of August, UCR collections on Calisphere received 33,557 pageviews (25,407 unique), which is far beyond those received in a typical week.

“The impact that this collection has had thus far is remarkable,” Milenkiewicz added. “Our pageview statistics on Calisphere have just soared over the past seven days, with much of this traffic attributed to the Klein photos!”

Glyer has generously offered to use File770 to help spread the word among the Science Fiction community about how fans can submit corrections to the photo captions.

“We knew there were some issues with the metadata before we put it up,” explained Cherry Williams, Director of Distinctive Collections. “But what’s important to us is that this is a vibrant, living project that’s going to continue to move and breathe and evolve.”

Fans who want to contribute corrections and/or enhancements for the Klein photo captions can submit them through this form, which was created for this project by Digital Assets Metadata Librarian, Noah Geraci.

Jacobson offers one word of caution to those who wish to help with the metadata corrections: “It will not show up immediately [on Calisphere] because we need to validate, in case two different people give us conflicting information.”

Williams, Jacobson, Milenkiewicz, and Geraci are already thinking ahead to how the library can improve the integration of crowdsourced metadata in the future, as there are more than 55,000 of Klein’s images that have not yet been digitized.

“I knew Jay Kay Klein back in the day (and may appear in some of his photos),” Dennis McCunney commented via email. “I think he'd be delighted at the response to his work.  I certainly am.”

This project will continue to grow, but it would not be possible without financial donations. Should you feel inspired to support the digitization of more of Klein’s photographs, please contact Jernine McBride, Associate Director of Development for the UCR Library, to discuss how you can help to move this project forward.