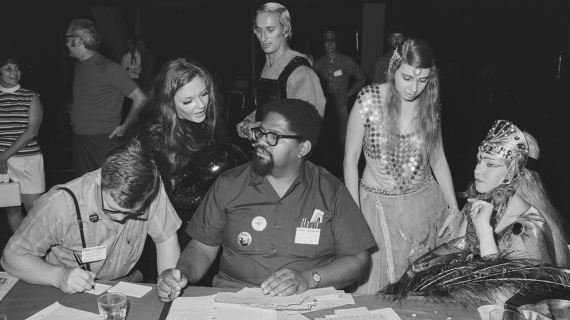 In collaboration with the science fiction fandom community, the UCR Library staff updated the image details and descriptions for the 5,933 images, which were first digitized in 2017. (View the collection on Calisphere.)

In 2017, an initial batch of 5,933 images from the Jay Kay Klein photographs and papers on science fiction fandom were digitized as part of a pilot project with the California Digital Library (part of the UC system and the group that hosts Calisphere). The images were first published with minimal descriptive information.

After publication, both internal review and robust feedback from the fandom community identified many opportunities to improve accuracy, detail, and context provided in titles and descriptive information about the photographs.

In subsequent years, UCR Library continued to gather community feedback by adding a new commenting feature to the collection, and the Metadata and Technical Services department worked continuously to make updates and corrections.

Yet the bulk of the images still needed careful review and the size and scope of a complete metadata overhaul presented a substantial barrier to launching a follow-up project. Special Collections Processing Archivist Andrew Lippert took steps to begin a review shortly before the university campus closed in March 2020, but the transition to working from home during the pandemic and the need for remote work within the Special Collections and University Archives department created an opportunity to commit fully to this monumental task.

The review began in February 2020 and ramped up during the spring quarter. Between May 2020 and May 2021, Lippert reviewed each of the nearly six thousand photographs and enriched the metadata based on community comments, information within the photographs, convention program books, Klein’s own “Convention Annual” photo books, and Lippert’s ability to identify the photos.

“Special acknowledgement is also due to the FANAC Fan History Project and Fancyclopedia 3; they were both invaluable resources for this project,” Lippert said. “It is difficult to say that this work will ever truly be ‘finished,’ as there are always more identifications to make and more contextual information to add. However, this new version of the metadata will certainly make these photographs more accessible by orders of magnitude.”

“Working on this project was a labor of love that immersed me in science fiction fandom and convention culture spanning several decades from the 1950s through the 1970s,” Lippert added. “Engaging with a single large archival collection on a daily basis always creates a sense of familiarity with the individual(s) and the subject matter that make up that collection; it was no different with Klein’s photos.” Lippert came to feel that he was getting to know some of the mainstays of the SF scene of that era as he found them in photo after photo at convention after convention. “My work on this project led me down countless rabbit holes, paths of discovery, and gave me so much invaluable context for the varied materials of the Eaton Collection as a whole,” he added.

Lippert would like to thank the community members who have contributed information, context, and identifications to the digitized photo collection since they were originally published in 2017. Additionally, special recognition is due to Lippert’s colleagues at the UCR Library, Noah Geraci, Digital Assets Metadata Librarian, and Sandy Enriquez, ​​Special Collections Public Services, Outreach & Community Engagement Librarian, for their invaluable contributions, support and assistance on this project.