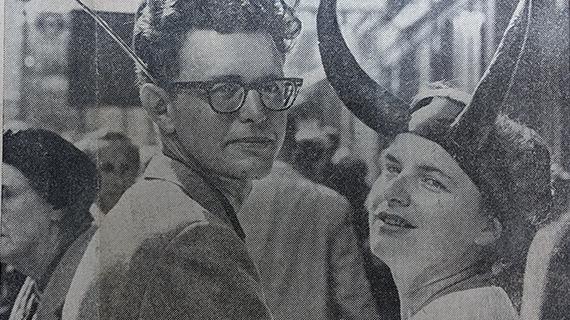 Astrid Bear, the daughter of award-winning Science Fiction novelist Poul Anderson and his wife Karen, recently donated their papers to the UCR Library.

“I am absolutely delighted that the Eaton Collection at UC Riverside is the custodian of my parents’ papers, preserving and making them available for scholars long into the future,” Bear said. “The Eaton Collection is one of the premier university SF/F collections in the world, and I am very happy that the Poul and Karen Anderson papers are part of it.”

A Danish-American author born in Bristol, Pa., Poul Anderson earned his undergraduate degree in Physics at the University of Minnesota, which provided a strong foundation for his science fiction writing. He published more than 50 novels and contributed to over 60 anthologies, receiving seven Hugo Awards, three Nebula Awards, a John W. Campbell Memorial Award, among others throughout his highly-decorated career. He also served as the President of the Science Fiction Writers of America from 1972-1973 and was named a Grand Master in 1997.

Karen Anderson co-wrote several books with Poul, including “The King of Ys” series. She was also a prolific publisher of fanzines and a very active contributor.

“Poul and Karen were both integral members of the science fiction and fantasy communities in California. Poul was one of those few authors who found success writing in both genres, and the collection represents that very well,” explained Andrew Lippert, Special Collections Processing Archivist, who processed the collection in 2019. “One of his most highly regarded works, which won the Hugo, Nebula, and Locus, is the novella ‘The Queen of Air and Darkness,’ which might be one of the first successful blendings of sci-fi and fantasy.” Few authors have won all three awards for a single piece, Lippert said.

The Andersons’ shared an interest in history, particularly northern European medieval themes, which found its way into some of Poul’s writing, according to Lippert. They were also founding members of the Society for Creative Anachronism (SCA) and both maintained active roles within the community and fandom.

“We are delighted to have the Anderson collection join the papers of Anne McCaffrey, Gregory Benford, Gardner Dozois, and others as part of the Eaton collection at UCR,” Lippert said.

Astrid Bear notes, “The knowledge, respect, and enthusiasm shown by the UCR staff during the donation and cataloguing process was quite wonderful.”