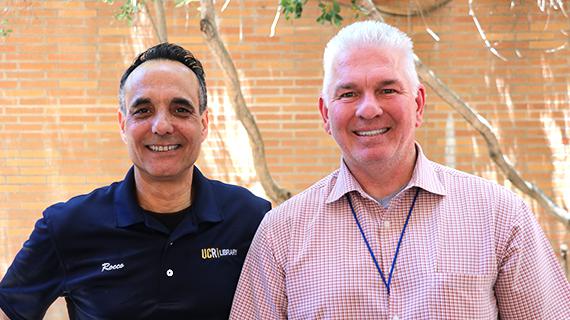 These team members became the fifth round of employees to be recognized through the KUDOS program.

Under the KUDOS program, non-probationary staff and academic employees at the UCR Library can be nominated by a peer for actions or contributions related to the UCR Library's mission that have a significant, positive impact on colleagues, library users, or others.

Nominations were submitted anonymously by library non-probationary staff and academic employees, and then were reviewed by members of Library Cabinet to determine which staff members would receive the KUDOS awards.

The spring quarter 2019 recipients received the following comments on their nomination forms. Please join us in celebrating these library employees’ contributions!

Dave Schuster is not a boss, he is a leader. He operates with integrity and excellence in every assignment he completes. He is not only accountable with library resources, but to the department heads, unit heads and employees that he works with. Dave places the heart of the library and those who work here above his own self-interest to always accomplish the greater good. Even when, the answer cannot be yes on something we may want, he seeks alternatives to make sure harmony and balance flows throughout every department.
The characteristics and traits that Dave possesses were magnified in the recent Access Services Circulation/Reserve restructure. There were staff who worked at stations for over a decade and were now being asked to move. There was physical downsizing that was occurring to achieve an upgraded, functional, modern work structure. For many, this could be a scary thing. However, with Dave’s guidance, everyone was included in the transition.
Dave ensured he had the voice of all those affected by the move, and then strategically worked with the supervisors and AULs to come up with a solid plan. He organized and orchestrated negotiations on many levels. He ensured buy-in from the staff on paint colors and workflows, he had to work with outside contractors for quotes, he had to ensure UCR contractors were on their assignments to meet deadlines, and he had to work with Library Admin for approvals.
There was definitely give-and-take during this process, but Dave kept it all going. He was even able to include the front unit of Circulation/Reserves, which was not in the original plans. Dave was thoughtful and intentional. Most importantly he always ensured those under him never felt undervalued or disqualified (even if they had no authority in the decision making process).
Dave was also not afraid to step in and get dirty in his slacks and dress shoes. Several times, we saw Dave assisting his employees, the contractors and even working solo to clear out heavy furniture, clean and vacuum floors, take out trash, etc. He could have easily let “someone else do it.” Yet, Dave, being Dave exhibited great leadership, did what was needed, and it trickled down to everyone in this process. It made us even want to help clean.
We truly thank Dave for orchestrating a department move that every employee was satisfied with. He even convinced certain supervisors that a color splash could look nice. Work stations have not been changed out since the 1990’s and now we have a fresh start.
Thank you Dave. Keep making a difference. We appreciate all you do!

Rocco takes such care in improving and maintaining library spaces. Often a support request ticket is barely submitted before he's on the scene to check things out and make a plan.

It's clear that Rocco takes pride in his work, and checks in throughout the process to make sure everything is meeting the vision of the space.

We are lucky to have Rocco as a colleague!