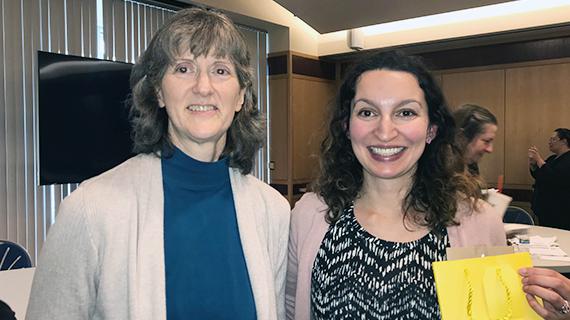 Under the KUDOS program, non-probationary staff and academic employees at the UCR Library can be nominated by a peer for actions or contributions related to the library's mission that have a significant, positive impact on colleagues, library users, or others.

Nominations were submitted anonymously by library non-probationary staff and academic employees, and then were reviewed by members of Library Cabinet to determine which staff members would receive the KUDOS awards.

“Through Dani's leadership, the Teaching and Learning Services Department has undergone some great changes. She has worked hard to revise and restructure the department in a very compassionate and conscientious manner; and she has continued to make us an even more cohesive team than we already were. Most of all, she leads, but alongside – and not over – us, which is the mark of a great leader. She has been doing amazing things, and I am sure she will continue to do so in the years to come.”

Reyes’ recommendation had the following comments:

“Janet has had a positive impact on the Library department and the UCR community. Her willingness to learn and participate when and where needed is invaluable. Janet has done an amazing job to connect GIS users on campus, giving them a way to communicate and share ideas and information.”

Please join us in celebrating Dani’s and Janet’s achievements!