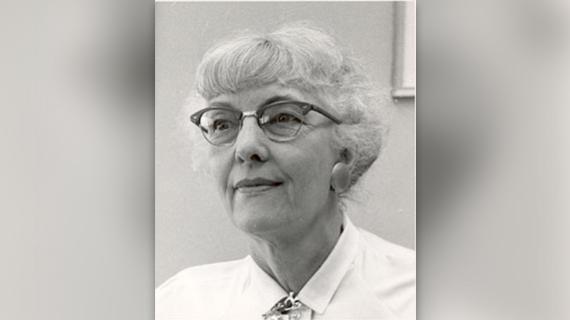 Starting with her appointment in Oct. 1953, UC Riverside’s first Dean of Women Loda Mae Davis helped to shape the future not just for Highlander women but for all UCR students.

In addition to serving as an Assistant Professor of Psychology, Davis was later appointed as the Associate Dean of Students. She firmly believed in sexual equality and drafted policies to support that ideal, making Riverside the first campus in the UC system to allow women students the same dormitory privileges that men had always enjoyed. Davis also advocated for the female faculty to have the same membership rights as the male faculty.

Many male students opined that Davis was "too liberal." Colleagues claimed that she frequently said that UCR was "the most sexist place she had ever worked," although Davis did not call herself a feminist.

The Loda Mae Davis papers (UA 082) include correspondence, publications, fiction and non-fiction manuscripts, speech transcripts, photographs, videos, audio cassettes, and other material that documents Davis’ work and the contributions of female faculty members who contributed to the UCR academic community. Received in 2015, the collection was first made available for research in Special Collections and University Archives at the Tomás Rivera Library starting in fall quarter 2018.

Born in 1898 to pioneer homesteaders in Washington state, Davis and her sister worked to support their own education. She graduated from UC Berkeley in 1923 with honors in commerce, followed by a masters of science in business in 1932. Graduate work in psychology at UC Berkeley preceded Davis’ 1953 appointment at UCR.

An economic analyst, consumer rights advocate, and world traveler, Davis worked for the Works Project Administration in 1936 and other Federal entities during the Roosevelt administration. In 1940, she became a consultant to the Consumer Division of the National Council of Defense, a job which led to her becoming the head of the first field staff of the Office of Price Administration. Following World War II, she worked for the UN Relief and Rehabilitation Administration.

Davis traveled throughout the United States to educate the public on the federal rationing and price control program. Additionally, she traveled extensively as a single woman, including trips to Panama and Mexico in 1934; Sweden, Norway, Finland, Russia, Ukraine, Czechoslovakia, Hungary, Austria, Switzerland, France, England, Canada and the Arctic Circle in 1935; and China and Japan in 1937. The onset of World War II provided other travel opportunities, as did a 1960 sabbatical which she spent in Samoa.

Davis stayed active within the UCR community after her 1964 retirement, helping to found the Loda Mae Davis Archive and to serve as a mentor to women in academia. She lived in Riverside until her death in 1989.