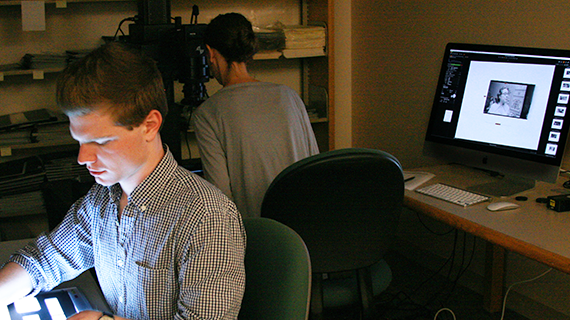 The California Digital Library and the UCR Library recently partnered to digitize nearly 6,000 photographs from the Jay Kay Klein papers – and completed the task in less than two days.

“If we had done the same project in-house, it would have taken us several months to do,” said University Librarian Steven Mandeville-Gamble.

UC Riverside is the first among the entire UC system to employ this specialized workflow with proprietary object holders designed by Pixel Acuity. The company has used the process with previous clients that include the Smithsonian Institution and Stanford University.

According to Mandeville-Gamble, this project demonstrated that non-book content can be digitized en masse at an affordable price by working with outside vendors.

“The Jay Kay Klein papers were so well cataloged and prepped for digitization, we finished well ahead of schedule,” commented Eric Philcox, owner of Pixel Acuity. “It was a pleasure working with UCR and CDL.”

“A standard has been set here, one that we will strive to meet in our future efforts to digitize comparable collections,” stated Eric Milenkiewicz, Digital Initiatives Program Manager.

This was the first in a series of pilot projects to use Pixel Acuity’s specialized mass digitization process to make more of the UCR Library’s non-book collections available online. For this inaugural project, Milenkiewicz selected 35mm negatives from the Eaton Collection’s Jay Kay Klein papers (MS 381), documenting the World Science Fiction Convention (Worldcon) from 1960-1971.

“We are actively working to make the collection available to researchers worldwide, which I know was one of the goals of the original bequest from Jay Kay Klein,” Mandeville-Gamble added.

The UCR Library plans to make the resulting digital collection available on Calisphere by August 15, 2017.

Although the full project spearheaded by the California Digital Library has not been completed yet, their Technical Lead for UC Mass Digitization Projects Paul Fogel commented, “Overall, I feel like the project is a big success.” Fogel added that CDL was motivated to work with UC Riverside thanks to the library's eagerness and the fact that library staff were already working with some of the systems that CDL wanted to test.

“It is always hard to be the trailblazer and I'm impressed by UCR's willingness to take bold steps in digitization,” Philcox added. “The impressive results of UCR and CDL's first mass digitization pilot will certainly have a positive impact on UC's digitization efforts moving forward.”

Milenkiewicz concluded, “This collaborative project allowed us to witness firsthand the efficiency at which non-book mass digitization can be completed and has provided us with techniques that can be deployed locally to increase our own productivity.”