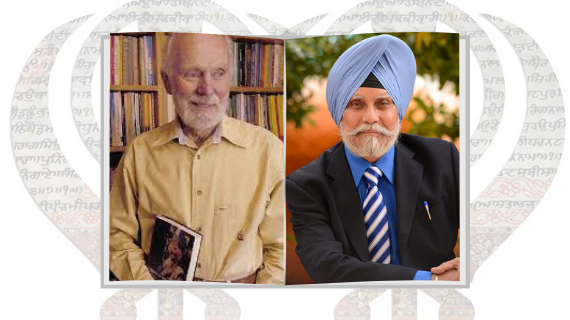 Who could have predicted that a connection between two scholars would one day establish a crucial pillar of the Sikh Studies program here at UC Riverside.

Considered one of the greatest historians of his time, New Zealand scholar Dr. William Hewat “Hew” McLeod (1932-2009) demonstrated a life-long commitment to critical scholarship that set him aside from his contemporaries. He was dedicated to research on the dissimilar areas of Sikh history that gave the discipline an international recognition in the present-day globalized world.

McLeod was always generous with his time and did whatever he could to help younger scholars find their own paths. McLeod’s contribution to Sikh Studies included mentoring students who now hold positions of prominence within the field, including UCR’s Dr. Pashaura Singh, Endowed Chair of the Department of Religious Studies since 2008.

As a result, thanks to McLeod’s long-standing professional relationship with Singh, upon his passing in 2009 McLeod’s widow gave UC Riverside the first right of refusal to acquire his personal collection of more than 3,000 books, manuscripts and other materials devoted to Sikh Studies. Other universities and Sikh organizations from New Zealand to the UK also coveted McLeod’s library.

In 2011, the UCR Library, the Department of Religious Studies, the Holstein Family and Community Endowed Chair, the Sikh Studies Endowed Chair and Dr. Singh himself all contributed funds toward the acquisition of McLeod’s personal collection. The W.H. McLeod Collection of Sikh Studies is now held in the Tomás Rivera Library.

Possessing the McLeod Collection has helped to elevate UCR’s Sikh Studies program above all other universities in the U.S., according to Singh. “It’s a very important collection. Certain items are quite rare and not available anywhere else in the world. It’s widely known to scholars that we have the collection, and they envy us. At this stage, ours is the leading Sikh Studies program in North America.”

A highly controversial scholar, McLeod authored more than 20 books, introducing Sikhism to both academic and popular audiences in the English-speaking world. “He single handedly introduced, nourished, and advanced the field of Sikh Studies in the western world for more than four decades,” Singh explained. “His writings have become the yardstick for scholarly works; anyone who wants to work in Sikh Studies must handle McLeod’s arguments.”

In the late 1980s, during a five-year term as a visiting scholar from his native New Zealand, McLeod supervised Singh’s research at the University of Toronto as Singh sought to become the first-ever Sikh Studies PhD candidate in Canada.

Being McLeod’s protege meant that Singh also became a target for controversy; but leadership at UCR has been supportive, he explained. Singh invites critics and scholars from across the globe to contribute to scholarly discourse every other year at UCR’s Sikh Studies Conference. Next year, the 7th Sikh Studies Conference will be held online from May 7-8, 2021. The information about the conference will be posted on the website of Dr. Jasbir Singh Saini Endowed Chair.