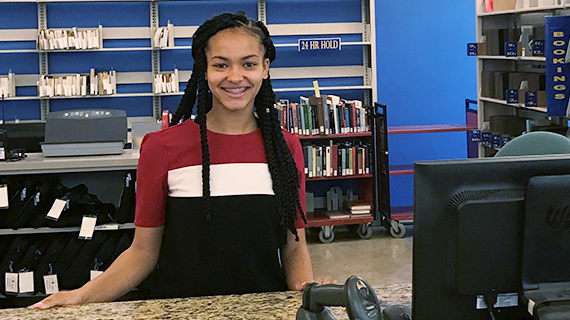 Most 16 year-olds are taking the SAT and starting to apply to colleges. Victoria Scott is already living the dream as a first-year student here at UC Riverside.

The youngest of three children raised by a single mother in Berkeley, California, Victoria showed academic promise very early in life. “I went straight from preschool to first grade. I also skipped my junior year of high school,” she explained. “Starting in seventh grade, when I got bored during summer break, my mom would send me to community college to take elective classes. So I started earning transfer credits very early.”

She applied and visited four different UC schools before deciding to become a Highlander. UCLA’s campus was too big and she didn’t feel “at home” there, whereas Berkeley was too close to home. Victoria felt that moving away from her hometown would allow her to branch out and do things on her own. With the rest of her family based in northern California, “My mom wanted me to come here to be close to my grandma, who lives in Palm Springs,” Victoria smiled. “Plus, the financial aid package here was really good, so that means I won’t have to take out any student loans.”

Victoria works at the Rivera Library Circulation/Reserve Desk, helping patrons check out library materials including course reserves, organizing books, answering phones, and assisting patrons with directional and informational questions. “She is smart, gifted, and a diligent worker. She is never late and exceeds expectations,” Access Services Desk Supervisor Leslie Settle said of Victoria. “She even had her car stolen from the dorm during finals week, right before Christmas, and was still able to be positive, report to work and excel in school. She is one remarkable young lady.”

“Working at the library was a job I wanted to acquire before I even stepped on campus,” Victoria stated. Not having spent much time in libraries before college, she figured that knowing where the textbooks are and how to check them out would be a valuable skill to learn. “Working at the library makes it easier to navigate,” she said. “It’s given me a sense of responsibility. I primarily work with other students, but there’s always a supervisor on staff, so we can call on them if we need to,” she added. “I like UCR because everyone is willing to help you.”

The giving nature that Victoria sees in her UCR Library colleagues is mirrored in her own generous spirit. In addition to being a student employee at the library, Victoria also works in the Financial Aid Office and volunteers with an on-campus program called KID (Kindling Intellectual Development). “In KIDS we travel to homeless shelters on Wednesday and Thursday nights and work with kids between the ages of one and twelve,” she described. “Over winter break, around Christmas time, our lesson plan covered what they’re thankful for, making Christmas trees, and teaching them the importance behind Christmas.”

Victoria has plans to found her own service organization on campus before she graduates. “My organization will teach the youth science and technology, to inspire them to learn, advance their knowledge, and change our communities. My goal is to run my program through an elementary school,” she explained. “I love kids! Kids are my favorite thing in the world. They make my days fun, energetic, and happy!”

Aligned with her helping nature, Victoria’s decision to major in neuroscience or biology was inspired by her family’s experience. “My stepbrother was in a motorcycle accident and he suffered significant loss of brain and body function. That experience sparked my curiosity and persuaded me to want to study and learn more about the brain,” she said.  Because she came to UCR with a lot of transfer credits, Victoria plans to take a quarter off sometime during her senior year to start applying for medical school.

Before that time, however, Victoria plans to do a medical mission in Haiti. “I would go for one week with a doctor during spring break, to provide them with IVs, blood transfusions, wrap up their ankles, and anything else they need assistance with,” she explained. Victoria is excited about the prospect of cultural immersion as well as the opportunity to serve others. “It would be an incredible and eye-opening experience to go to a third world country and provide them with healthcare that we take for granted.”

In addition, Victoria hopes to study abroad, but has not yet decided whether to go to Mexico, Spain, Italy or France. “I want to go several places,” she said. “I was also thinking about doing a Semester at Sea, because you get to cruise either the Atlantic, Caribbean, or Pacific. You do your studying on a ship and then, when you’re off the ship, you have time just to explore.”

With a service-oriented spirit like Victoria’s, the more places she can visit, the more people she will benefit with her skills and her presence.