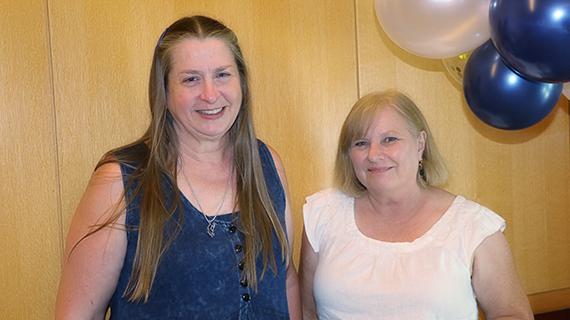 The end of each academic year brings many goodbyes, both farewells to graduating students and to members of our career staff who retired in 2019.

We would like to recognize and celebrate the following UCR Library colleagues, who shared some of their UCR history with us:

Music Library Manager Sharla Desens started as a Music Library student employee in 1978. She became a staff member in September 1982, as the Assistant Night Supervisor for Rivera Library.

Her favorite memory of working in the Library was when Sharla was pregnant with her second son and was working swing shift as the Night Supervisor. An older couple came to the counter, asking for her. She figured they needed help finding something, to discuss a bill, or something like that -- but it turned out that the woman had crocheted a pink and blue afghan for her baby.  She didn’t really know the couple, but apparently she had helped them and made an impression.  Sharla was very touched by the gesture.

What Sharla will miss most are the many friends she has made amongst the UCR community, both staff and library users.

The most unusual thing that happened to Sharla on the job was when she gained notoriety for assisting in the arrest of Stephen Blumberg, famous book thief and bibliomaniac.  His arrest at UCR put his fingerprints into the system, and enabled investigators to connect him with other book thefts around the country.

Some on-campus events that Sharla remembers most vividly, from her 40+ years at UCR, include:  the riots caused by the Rodney King beating, student protesters taking over the library, earthquakes, 9/11, the deaths of two sitting chancellors, graduations, and other celebrations.  Sharla remembers fires in the libraries, chickens running loose in Rivera, and evacuations during the Rivera Library renovation.  And many police incidents, which thankfully we don’t see as much these days, thanks to an increased police presence on campus, and the addition of library security guards (positions for which Sharla was an early advocate).  Sharla says she could fill up an entire book on the library, once she gets started.

Sharla vividly remembers walking around the library after the Landers Earthquake on Sunday, June 28,1992.  Library administrators were all off at the American Library Association (ALA) conference, and the Reserve Services Manager and Sharla were asked to assess the damage.  As they were walking around on the fourth floor looking at books three feet deep on the floor, a significant aftershock shook the building.  Sharla was pregnant with her youngest son at the time, and her colleague said, “Do you want to have that baby right here, right now?  Let’s get out of here!”

Sharla’s last day was June 27, 2019. Thank you for your many years of service to the UCR Library, Sharla!

The UCR Library would like to thank each of our retiring staff members, both those who shared their stories here and those who were not available for comment (perhaps because they're already busy enjoying their retirement). We are grateful to have had you as our colleagues and friends, we appreciate your many years of excellent service, and we wish you all the best in your future!