Home / About / News / New 3D printers ready for a spin 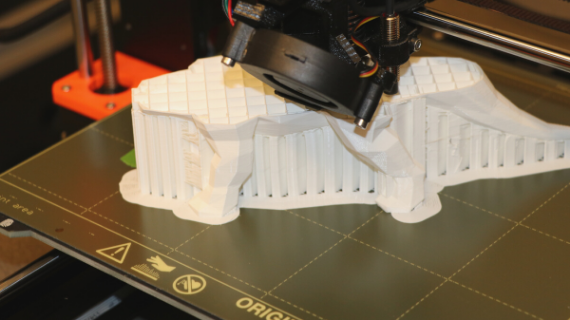 Alvaro Alvarez believes 3D printers have the ability to open up a world of possibilities.

The Innovative Media Librarian for the UCR Library has a passion for robotics and technology and enjoys transforming three-dimensional digital models into tangible objects.

“I love the fact that I can think of something and bring it to life with electronics,” Alvaro said. “You can make anything—toys, even print 3D parts for 3D printers.”

Alvaro works at The Creat’R Lab, located in the Orbach Library. The Creat’R Lab is an innovative learning environment where new technologies, scientific curiosity, and entrepreneurship come together across the disciplines. 3D printers are a perfect fit for this environment, and the UCR Library is adding more to its arsenal.

“We’ve done our research. From reading reviews and from talking to people that have used the models we purchased, they're really good, very reliable,” Alvaro said.

3D printing has grown in popularity over the years, and as a result, demand has increased. These two printers will assist in meeting demand so the UCR Library can better serve students and faculty. Additionally, it’s also good to have more printers in the event any need repair.

“There is usually a higher demand at the end of each quarter,” Alvaro explained. “Each print job can take anywhere from three to four hours so if a printer goes down, it could be hard to keep up.”

The Creat’R Lab has printed some unique items, including fault lines for students and faculty in Earth Sciences.

“We have a class that's been coming in, they've been printing terrain and earthquake faults,” Alvaro said. “Not only is it a great visual, but they can also take out the fault lines and pop them back in.”

The Creat’R Lab has a special connection with Earth Sciences. Three months into the Creat’R Lab’s arrival to Orbach, a researcher in Earth Sciences, Christodoulos Kyriakopoulos, collaborated with The Lab in 2017 to create a 3D-printed earthquake fault model. 3D printed fault lines seemed like a wild idea at the time but proved incredibly useful. The model was showcased at a congressional meeting in 2018, during which the House Committee on Science, Space, and Technology deliberated on the future of the National Earthquake Hazards Reduction Program.

The new 3D printers are currently undergoing testing and will be fully operational on April 4. If you want to learn more about the 3D printing process at the Creat’R Lab or submit a 3D printing request, review our Creat'R Lab 3D printing guide.

While the 3D Printing Room is currently only open to Creat’R Lab staff,  we have plans to provide a more interactive experience in the future. Meanwhile, we welcome you to peek into our large window and see the equipment in action!