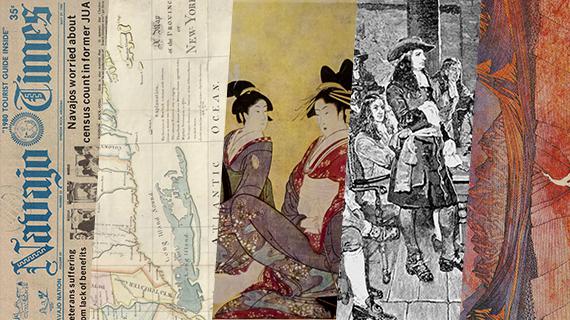 The UCR Library is pleased to announce the following recent resource acquisitions:

Civil War Primary Source Documents from The New-York Historical Society contains unique manuscript material chronicling all aspects of the American Civil War from warfare on land, at sea, in hospitals and prison camps, and reactions and impressions of the War from the home front. The collection, comprised of more than 110,000 pages, focuses on the War as it was fought from 1861 to 1865 and represents both Northern and Southern perspectives.

Revolutionary War Era Orderly Books from the New-York Historical Society is a collection of more than 30,000 pages of historically unique material from more than 200 orderly books spanning from 1748 to 1817. The collection includes both British and American orderly books, a form of manuscript journals kept by military units containing their orders from higher-ranking officers in addition to other information essential to military operations, dating from the French and Indian War through the War of 1812, with the bulk representing the activities of American forces during the Revolutionary War.

Cannabis NewsBank: Research Edition is a powerful, multi-disciplinary resource for students and researchers seeking information related to the cannabis and hemp industries. Its searchable database features current and historical news and information from more than 12,000 sources, including over three million cannabis and hemp related reports, documents and articles. This one-of- a-kind research tool features content from prominent cannabis and hemp industry publications as well as in-depth local coverage from every state in the United States, Canada, and countries across the globe.

New Sections of JoVE: The Journal of Visualized Experiments

JoVE is a video journal platform featuring videos that teach fundamental concepts and techniques for the lab.  Via JoVE, researchers and students can view the intricate details of cutting-edge experiments rather than read them in text articles.  The UCR Library has added two collections to our JoVE offerings: JoVe Science Education Chemistry & Advanced Biology and JoVE Immunology and Infection.

Colonial America, via the Adam Matthew Platform, makes available all 1,450 volumes of the CO 5 series from The National Archives, UK, covering the period 1606 to 1822. CO 5 consists of the original correspondence between the British government and the governments of the American colonies, making it a uniquely rich resource for all historians of the period.  The UCR Library has access to Module I: Early Settlement, Expansion and Rivalries, and Module II: Towards Revolution.  For more information on these modules, see http://www.colonialamerica.amdigital.co.uk/Introduction/NatureAndScope.

This diverse and comprehensive collection focuses on the cultural study of music and explores content from across the globe.  Produced in collaboration with the UCLA Ethnomusicology Archive, the material in this collection includes thousands of audio field recordings and interviews, educational recordings, film footage, field notebooks, slides, correspondence and ephemera from over 60 fields of study.

From historic pressings to contemporary periodicals, American Indian Newspapers contains nearly 200 years of Indigenous print journalism from the United States and Canada. With newspapers representing a huge variety in publisher, audience and era, this resource allows researchers to discover how events were reported by and for Indigenous communities.

American Indian Newspapers was developed with, and has only been made possible by, the permission and contribution of the newspaper publishers and Tribal Councils concerned.

Oxford Bibliographies are developed cooperatively with scholars and librarians worldwide, and offer exclusive, authoritative research guides across a variety of subject areas. The Oxford Bibliographies combine the best features of an annotated bibliography and a high-level encyclopedia and direct researchers to the best available scholarship in a given subject.  The UCR Library also has access to the following Oxford Bibliographies: Anthropology, Art History, Chinese Studies, Education, Evolutionary Biology, Latin American Studies, Latinx Studies, Music, Psychology, and Public Health.