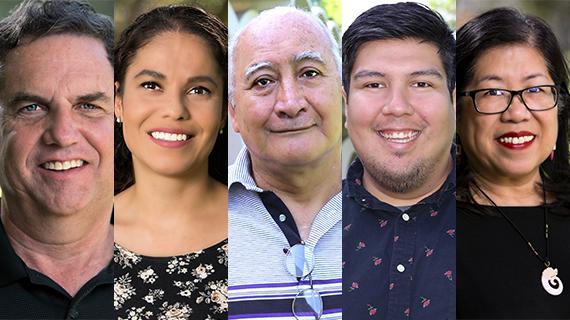 Join us as we celebrate these recent achievements by the following UCR Library employees.

Dan Szilagyi, Manager of Cyberinfrastructure recently completed the UC Information Technology Leadership Academy (UCITLA), taught by faculty at the UC Berkeley Haas School of Business. UCITLA is an intensive learning experience that consisted of two three-day sessions in February and May 2019, along with a team project that was completed in between sessions. Szilagyi participated in the fourth UCITLA cohort.

Participants learned about strategic leadership, innovation and change management; networked with peers to support collaboration and innovation initiatives across the UC system; and prepared to guide staff through change, challenge and opportunity.

UC Riverside’s CIO Danna Gianforte nominated Szilagyi for UCITLA 2019. He said, “UCITLA was excellent and eye-opening, particularly in the area of innovation. The people were amazing to work with.”

Hankins’ role keeps her working closely with dozens of library student employees in Access Services, which is what first piqued her interest in PAACC. “A traditional academic advisor only interacts with their students once per quarter, and that’s if their students are proactive. I work with my students 20 hours a week. PAACC gave me tools and resources to use in my current job,” she said.

The PAACC program also provided skills for working with library patrons. As Hankins explained, “Because we work at the Circulation Desk, people think we’re their best friends, so they’ll tell us their life stories. So we can put these skills into practice with the patrons we assist, as well.”

Cataloging Librarian Ruben Urbizagastegui recently published “Analysis of El Niño Coastal phenomenon by the method of associated words.”(Ciência da Informação. 2019, v. 48, n. 2.). In this paper, he compared two articles about the local weather phenomenon that affects the coasts of Peru and Ecuador. “El Niño causes a mess all over the world, with typhoons in India and droughts in Australia and California,” he explained. “But the Incas already knew of this phenomenon and knew how to control it.”

The articles he contrasted were written by two of the most prestigious newspapers in Peru -- one government-owned and the other privately owned. He noted the impact of socio-economic influence on the written word. “We analyzed the information, expecting to find two different perspectives, but we found only one,” he said. “In other words, the newspapers don’t care about the people. They do what they do to protect their own interests.”

Urbizagastegui has worked at the UCR Library for 30 years and has published eight books in that time. Additionally, he regularly reviews articles for five or six different library scientific journals. Most of his work has been published in Spanish or Portuguese on issues that affect marginalized communities.

In May 2019, Raul Aguilera, Access Services Assistant (Evenings) at Rivera Library completed his Master of Library and Information Science (MLIS) degree with San Jose State University. He began his career as a work-study student at Orbach Library in January 2014, while working toward his Bachelor’s degree in English at UC Riverside (class of 2015).

“Originally, I wanted to be an English professor,” Aguilera said. As a student, he saw the value of the services that the library provided and the research that librarians do; so he began to envision a different career path in academia. Aguilera believes that his life experience as a UCR student gives him an added perspective about which kinds of library services would be most valuable to our patrons.

“I really like giving service, and if someone leaves the desk happy, I feel like I’ve accomplished something,” he added. “I think that’s just part of my nature, being able to contribute in a higher capacity, going above and beyond whenever I’m able to.”

Librarians with Spines is the second volume in a radical book of essays and chapters on library issues and topics related to emerging and marginalized communities, and is available for purchase on Amazon.