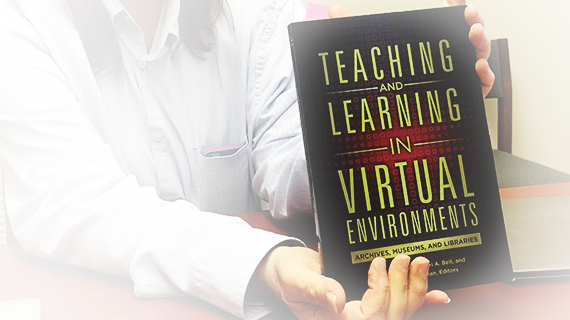 Our Jay Kay and Doris Klein Librarian for Science Fiction, JJ Jacobson recently contributed a chapter to a book titled, Teaching and Learning in Virtual Environments: Archives, Museums, and Libraries.

JJ’s chapter, Crowdsourcing the Fictive Experience: Virtual-World Emergent Narrative from a Collections Perspective, is about the practice of Immersive Interactive Improvisatory Narrative, or IIIN.

“It’s a very common feature of virtual worlds of all kinds,” JJ explained. “IIIN is a modality of storytelling. There’s role-play, sometimes recreational, sometimes tied to history, as well as re-enactment and historical interpretation. It’s connected to speculative literature because many of these narrative interactions exist in a context that is speculative – alternate history, for instance – or occasions for this kind of narrative are in a context that is related to or is directly the speculative or fantastical imagination.”

IIIN can be traced to modern improvisatory theater forms, JJ explained, such as the Renaissance Faire; and it is often found in Civil War and similar reenactments, which exist to explore history and educate participants as well as audiences. “It’s an interesting question to compare those to the evolution of community theater, too” she continued. “All of these things exist in the real world, but with some specific entertainment or educational mission. One of the questions we barely touched on was: ‘When did IIIN start to become pure recreation?’”

JJ’s chapter is the result of three distinct discussions on the topic of IIIN. JJ spoke with an expert on living history in museums and places like Plimoth Plantation, a special collections librarian from a well-respected institution, and a professional historical interpreter who plays Mildred Cecil, Lady Burleigh, wife of Lord Burleigh, chief advisor to Queen Elizabeth I.

“These conversations opened up some questions worth thinking about, questions that nobody else seems to be writing about, but that people within the reenactment and historical recreation and virtual worlds talk about all the time,” JJ said. “We talked about the phenomenon and why someone might study it, what a research collection might look like.”

To date, JJ has not seen much scholarly writing on this topic, especially not with the same emphasis.

According to JJ, some questions that could inspire scholarly research on the subject of IIIN might include:

“The Eaton Collection is largely a collection of texts and other narrative forms, but stories that are already done and finished are not the only occasion for the fantastical imagination to work,” JJ explained. “So here is a very interesting way of creating something that could easily be subject matter in the Eaton Collection. If people have made up their own country and they act the story together and build it up as they go, that’s still the kind of thing we collect. Those kinds of worlds, those kinds of subjects are intensely interesting to me. Even though you won’t find those exact worlds in the Eaton Collection, you’ll find many like them in motivation, structure, and so on.”

The book was published by Libraries Unlimited in 2016 and is now available on Amazon, Barnes and Noble, and other retailers.