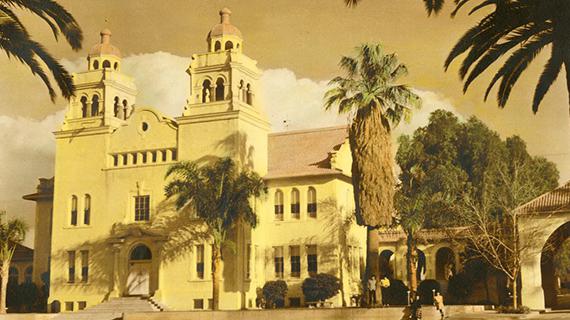 The Sherman Indian Museum digitization project now has more than 9,000 items available online through Calisphere; at the completion of the project, this figure will surpass 13,000.

“Native Americans were a big part of Southern California history that people don’t know a lot about, outside of academia,” explained Dominguez, who has worked with the Indigenous community for about 10 years, including her time with UC Riverside. “The native community is very active, very present. People with indigenous heritage only make about 1-1.5% of the population, but their culture is strong and thriving.”

The digitized collection spans more than a century of the school’s history: from the early years of the Perris Indian School in the 1890s, the Sherman Institute in the early 1900s, to when Sherman Indian High School was founded in the early 1970s, up to contemporary students in 2009.

“It has been a dream come true to have this project come to reality. Our boarding school story needs to be told, shared, and available to the world. That story has impacted our tribes in many ways, good and bad,” said Lorene Sisquoc, Director of the Sherman Indian Museum. “Now the photos and documents our museum holds can be accessed in a safe way. The alumni, families and researchers who are seeking this information can now have it at their fingertips. These records of our school’s history are now preserved for future generations to know this story.”

“Even though what we’re showing is mostly history, it’s still relevant to the present,” Dominguez added. “They’re living in modern times, but still keeping their history, traditions and culture relevant.”

Early on, Digitization Program Services Manager Eric Milenkiewicz knew that having this collection available digitally would have a deeply rewarding impact for the Native American community and researchers worldwide.

“Successful projects like this demonstrate what can be achieved when academic institutions and local community archives join forces,” Milenkiewicz added. “Not only does this help to preserve and increase access to these cultural heritage collections, but it also helps to strengthen the bond between the university and the community it serves."

The project’s goals went beyond purely digitizing the collection and publishing it on the Internet. Dominguez also spent time teaching the students and Sherman Indian Museum Director Lorene Sisquoc how to use their newly-acquired tools and equipment, how to create metadata, and how to research using the internet to cross-reference details, so that the museum could continue the work independently after this project’s term ends.

The computer and scanning equipment used for the project will remain on-site at the Museum, and Dominguez added that Sisquoc intends to have Sherman Indian High School students continue scanning photos and documents, though they may not be published immediately on Calisphere. Even with the projected 13,000 items published online at project’s end, Dominguez said that there are still several thousand items remaining to be digitized, which were not part of the original project.

After digitization, a lot of behind-the-scenes work still remained before the team could publish this massive collection on Calisphere, which is where Digital Assets Metadata Librarian Noah Geraci made significant contributions to the project’s success. Geraci’s work transformed the collection from a group of files on a hard drive to a publicly accessible online resource. “It’s been really wonderful to work with the Sherman community and be part of such a meaningful project,” he said.

"The Sherman Digital Project has already had an incredible impact on Native American individuals, families, and tribes who have accessed the collections online. Until the digital project, many American Indians had been unable to visit Sherman Indian Museum to access records germane to their families and people.  Now they have easy access to documents, and they are able to learn about their friends and relatives who were former students of Sherman Institute,” explained Dr. Clifford E. Trafzer, Distinguished Professor of History and Rupert Costo Chair in American Indian Affairs. “In addition to supporting new scholarship, digital access has opened new research opportunities to Native Americans. The project is a major contribution and welcomed by many researchers, including student researchers of all ages."​

Milenkiewicz originally collaborated with Dr. Trafzer to write and submit the grant proposal in April 2016. In January 2017, the library received the grant totaling $376,191 from the Council on Library and Information Resources (CLIR), generously funded by the Andrew W. Mellon Foundation.