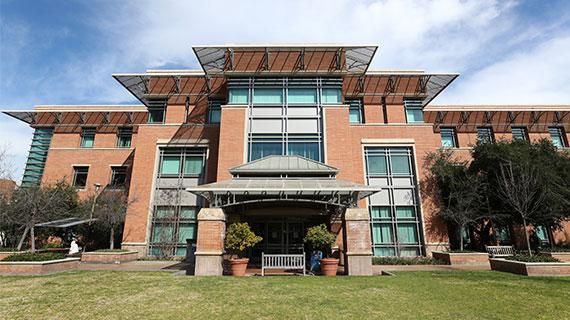 November 2019 marks the tenth anniversary of the naming of the Orbach Science Library after former UCR Chancellor Raymond L. Orbach.

When it was opened in 1998, the Science Library was the first new library building at UC Riverside in over 25 years.

Born in Los Angeles, California in 1934, Raymond L. Orbach is a physicist and administrator who graduated from the California Institute of Technology in 1956 and received his Ph.D. from UC Berkeley in 1960.

Orbach spent much of his early career at UC Los Angeles (UCLA). He served as the Provost of the College of Letters and Science at UCLA from 1982 before coming to UCR as Chancellor in 1992. Orbach left UCR in 2002 to become director of the Office of Science at the US Department of Energy in Washington D.C.

Orbach served as UC Riverside's second longest-tenured chancellor, having held the post for 10 years. During his time as chancellor the student population at UCR nearly doubled from 8,500 to 15,500 and the campus experienced a building boom that  featured over 1 million square feet of office, research, and teaching facilities constructed.

During an April 2017 visit, Orbach reflected that his vision for UC Riverside was to develop the campus into the center of innovation, academic research and economic growth in southern California. His namesake library continues to serve as a hub of research excellence for STEM fields.

The Orbach Library brings together students, researchers and faculty from various disciplines to collaborate and experiment with new technologies in the Creat’R Lab, and to explore entrepreneurial pathways through workshops and events for students presented by Creat’R LaunchPad, a symbiotic cooperative comprised of the Creat’R Lab and the Blackstone LaunchPad.

If you are a UCR alumni or community stakeholder who shares this vision, please consider supporting the Raymond L. Orbach Library Endowed Fund to Support the Sciences and Engineering. To learn more, please contact Jernine McBride Williams, Associate Director of Development for the UCR Library.