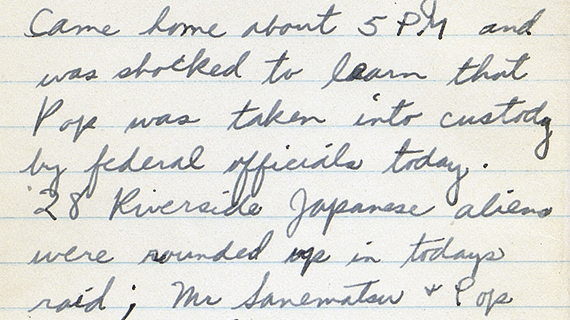 The Fujimoto Transcripts project has made a treasured library resource even more accessible to a global audience.

The diaries of Japanese Americans, Toranosuke (George) Fujimoto and George Fujimoto Jr. constitute one of the most valuable and unique collections housed in the UCR Special Collections & University Archives. Toranosuke, born in 1882, kept a diary from 1913 to 1968. George Jr. wrote in his diary from 1942, when he was 21 years old, to 1948. These astonishing materials document the daily life experiences of both the father and the son during World War II, when the family was forcibly removed from their Riverside, California home and taken to an incarceration camp in Poston, Arizona.

The opening entry in George Jr.’s diary, date March 11, 1942, documents his return from school to find that his father and others had been arrested and taken away:

“Went to school as usual… Came home about 5PM and was shocked to learn that Pop was taken into custody today by federal officials. 28 Riverside Japanese aliens were rounded up in today's raid; Mr. Sanematsu & Pop included. Fortunately Pop was partially prepared.”

According to Cherry Williams, Director of Distinctive Collections, some readers have had trouble accessing and using the digitized diaries because the readers were unfamiliar with cursive script, or because they lacked fluency with the English language and sentence structure, or due to challenges with reading the soft color of the ink, among others.

“The Fujimoto transcription project sought to alleviate such impediments by enhancing, expanding, and facilitating the ease with which these important and distinctive documents can be used and re-used by the general public, research scholars, students and any others interested in this period in Riverside County and The Inland Empire during WWII,” Williams explained.

The UCR Library recognizes and extends its deep appreciation to the committed librarians and library staff who dedicated months of work creating the transcriptions, which are now available on the Calisphere website: Diary of George Fujimoto Jr. (1942) — Calisphere

At present, only the diaries of George Fujimoto Jr. have been transcribed.