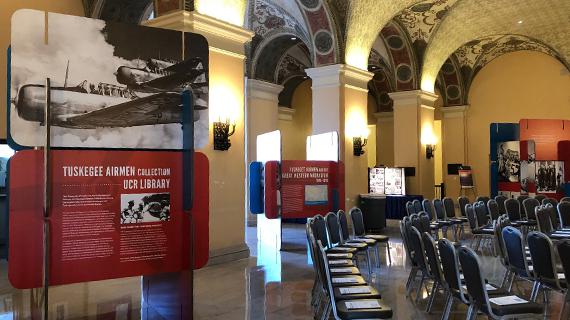 On Wednesday, Feb. 5, the L.A. County Department of Military & Veterans Affairs (MVA) hosted a reception to kick off Black History Month, featuring a special art exhibit of the WWII flying group, the Tuskegee Airmen, on loan courtesy of the UCR Library.

The display will be open to the public during regular business hours at the Bob Hope Patriotic Hall in Los Angeles from Feb. 5 - 27, 2020. This venue is a historical building dedicated to assisting and memorializing US Veterans, so the exhibit supports their mission.

Commissioned by the UCR Library in 2016, Ann Marshall and Shar Huston of Annex Design Services originally created the concept for the exhibition materials.

Since 2016, the traveling exhibit has been featured at various venues, including the Association of African American Museums Annual Conference, the University of California, San Diego, and the San Bernardino County Museum, among others.