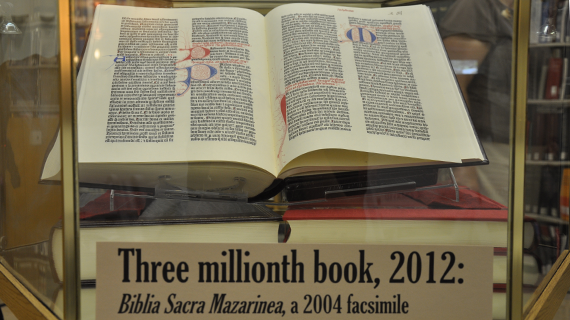 RIVERSIDE, Calif. — UCR Library will celebrate the acquisition of its 3 millionth volume in a ceremony on April 18 at 2:30 p.m. in the lobby of the Tomás Rivera Library on the UC Riverside campus.

The keynote speaker will be Terry Belanger, University Professor emeritus at the University of Virginia and founding director of Rare Book School, a nonprofit institute devoted to the history of books and printing, and to rare books and special collections librarianship.  He won a prestigious MacArthur Fellowship in 2005.

Mike Terry, pipe major of the UCR Pipe Band, will perform an original composition, “Literary Notes” (An Ode to the Book).   A reception will follow. The event is free and open to the public. Parking costs $5 in Lot 6. To RSVP call (951) 827-4941 or email terrig@ucr.edu.

Achieving a collection size of 3 million volumes is a milestone for UCR, said University Librarian Ruth M. Jackson. The library celebrated its 1 millionth volume in March 1981, and its 2 millionth volume in November 2001. Currently the number of volumes held by the libraries is 3,214,420. Of that total, more than 404,000 are e-books.

With this achievement, UCR ranks 81st for the number of volumes held among the 115 academic research libraries in the United States and Canada that are members of the Association of Research Libraries (ARL). That places UC Riverside just below UC Irvine, which ranks 77th, and just above UC Santa Barbara, which ranks 84th.

“The digital transition is occurring at a steady pace,” Jackson said, and will ultimately transform libraries in much the same way as the printing press revolutionized the process of book-making and distribution in the 15th century.

Printed books will continue to co-exist with e-books and other formats and will remain a staple of university and research libraries for some time, she said.  Currently, only 20 percent of all in-copyright scholarly books published in the U.S. and worldwide are fully available in digital form, she said. Electronic books allow multiple users to browse their pages at the same time; can be viewed and accessed on-site in the library, or remotely from home, student residences, and faculty offices using either hard-wired computers, laptops, or hand held mobile devices with proper UCR authentication; and will ultimately offer vast advantages for full-text searching/data mining as the trend continues.

Research libraries, such as the UCR Library, typically purchase books upon the recommendation of library subject-specialists, in collaboration with faculty, based upon the national publication output and the University’s profile, Jackson explained.

In fiscal year 2011, the UCR Library initiated a pilot for testing a demand-driven acquisition (DDA) system that enables all UCR-affiliated library users to access and read licensed e-books loaded into the Scotty catalog by three major vendors. The e-books and the titles for printed books are chosen for loading based upon the university’s academic and research profile. If an e-book or the title for a printed book is accessed or used three times, a purchase is automatically made by the system for the UCR Library, making the electronic title part of the permanent collection. When the title for a print book is accessed for the first time, the system will ask the user if he or she wants to place an automatic order for the title.

The UCR Library will analyze purchasing patterns based upon the pilot at the end of the current fiscal year to determine how the two models of selecting materials for permanent addition to the collections differ and complement each other.

“It’s still very much a print world  in many ways and will be so for a while in several key academic disciplines and publishing fields such as the arts, humanities, social sciences, foreign language materials, and selected areas of the sciences ,” Jackson said. “It’s also one of the most exciting times to be a librarian and information scientist because of the mix of information resources we are able to make available to our users.

“The digital transition in publishing is changing the whole information environment. Libraries have a significant role to play in reshaping the campus information environment and developing new ways to manage, deliver, and preserve both print and digital resources, as we continue our role of making easily available the scientific, social and cultural publishing output of the nation and the world in support of research and learning.”