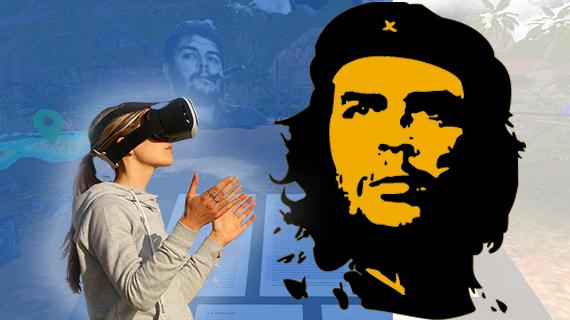 Dr. Juliette Levy will return to the UCR Library to take students on a third round of testing with her early-stage virtual reality prototype, “Che’s Village.”

The prototype was built to amplify students' experience of studying Che Guevara's speech, "Social Ideals of the Rebel Army," which he delivered on January 27, 1959.

The third round of VR experimentation will take place in the Teaching & Learning Center in Rivera Library from 10:00 am to 5:00 pm on Monday, Nov. 5 and Tuesday, Nov. 6. The experience should take approximately 10 to 15 minutes to explore, and developers were available to discuss user feedback immediately afterward.

Levy and her co-creator Tawny Schlieski listened to feedback from the first- and second-round beta testers when they debuted “Che’s Village” in February 2017 and again in June 2017. They integrated users’ previous suggestions into this newly redesigned VR module.

This VR system was originally developed for Levy’s History 75 (Introduction to Latin American History) course, but all interested UC Riverside students, faculty, and staff were welcome and encouraged to participate.

Those interested are encouraged to RSVP to guarantee a spot.