Reflecting on our history for UC Riverside's 65th Anniversary 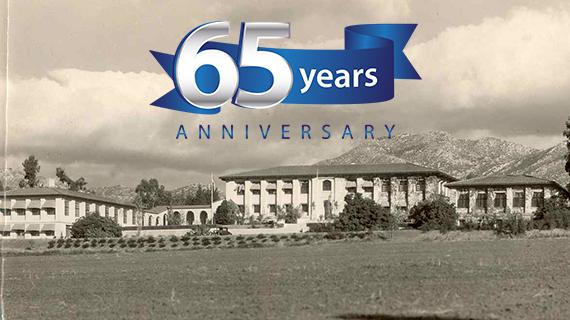 Here are a few highlights from University Archives that showcase some fun facts and figures, in honor of the 65th anniversary of UC Riverside.

The Riverside Citrus Experiment Station opened for business on February 14, 1907, but UC Riverside did not become a university until February 15, 1954 – 47 years and one day later. 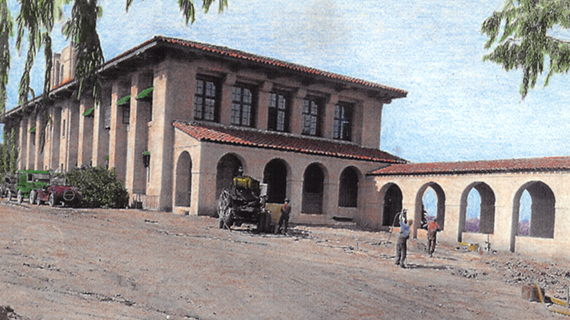 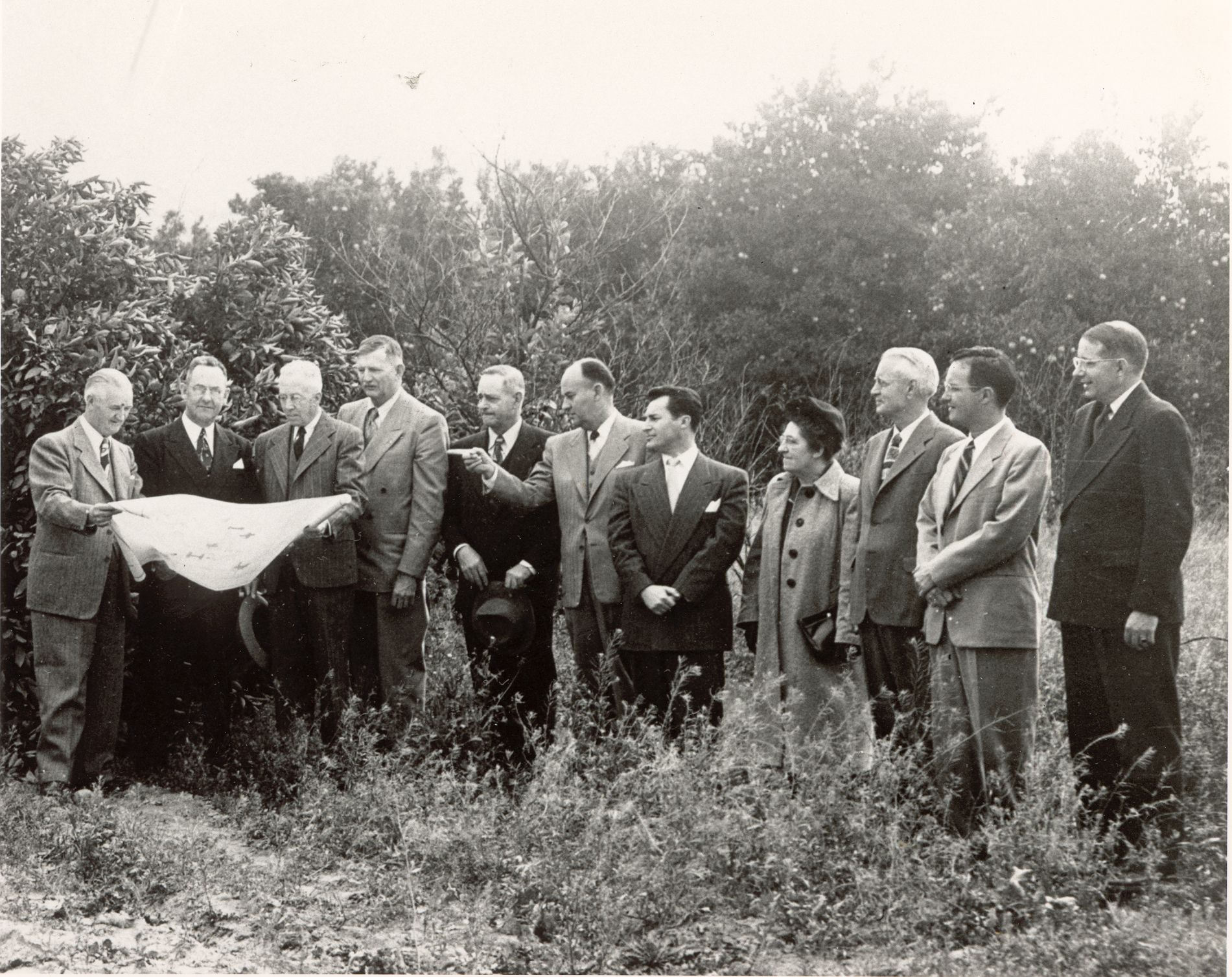 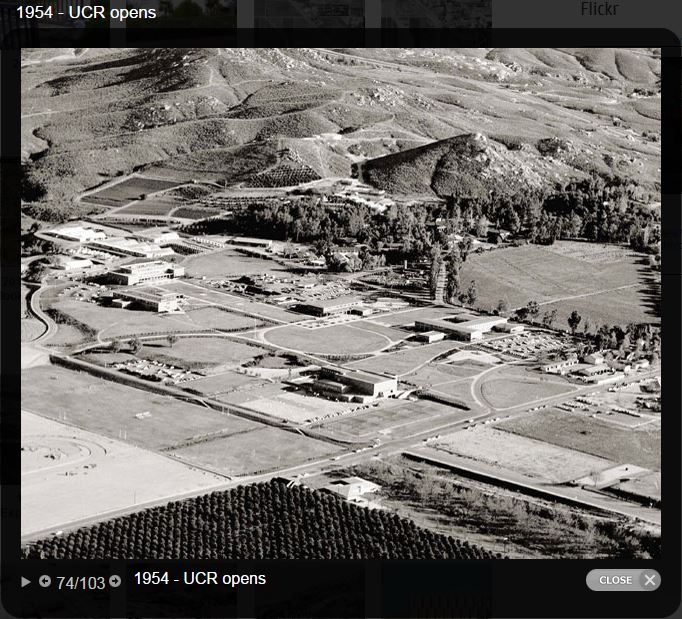 The official dedication of UC Riverside took place on October 19, 1954. 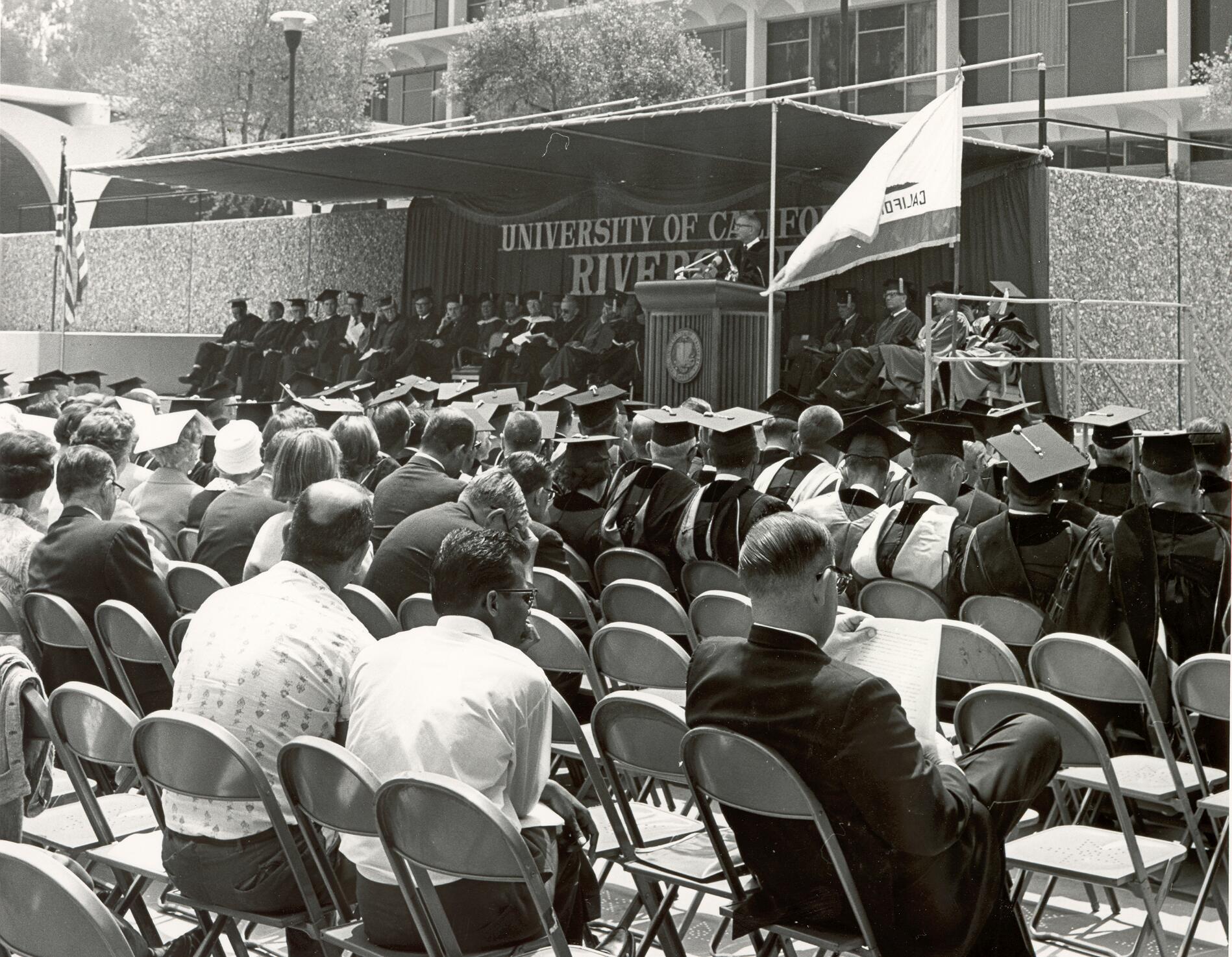 Watch a video from the UCR dedication, with an address from the President of the University of California, Robert Sproul:

The first UC Riverside commencement on June 20, 1955 had 20 graduates. Early years' UCR graduates signed their names in concrete, and their signatures can still be found on campus today, on the walkway in between the Scotty the Bear statue and the Coffee Bean & Tea Leaf. 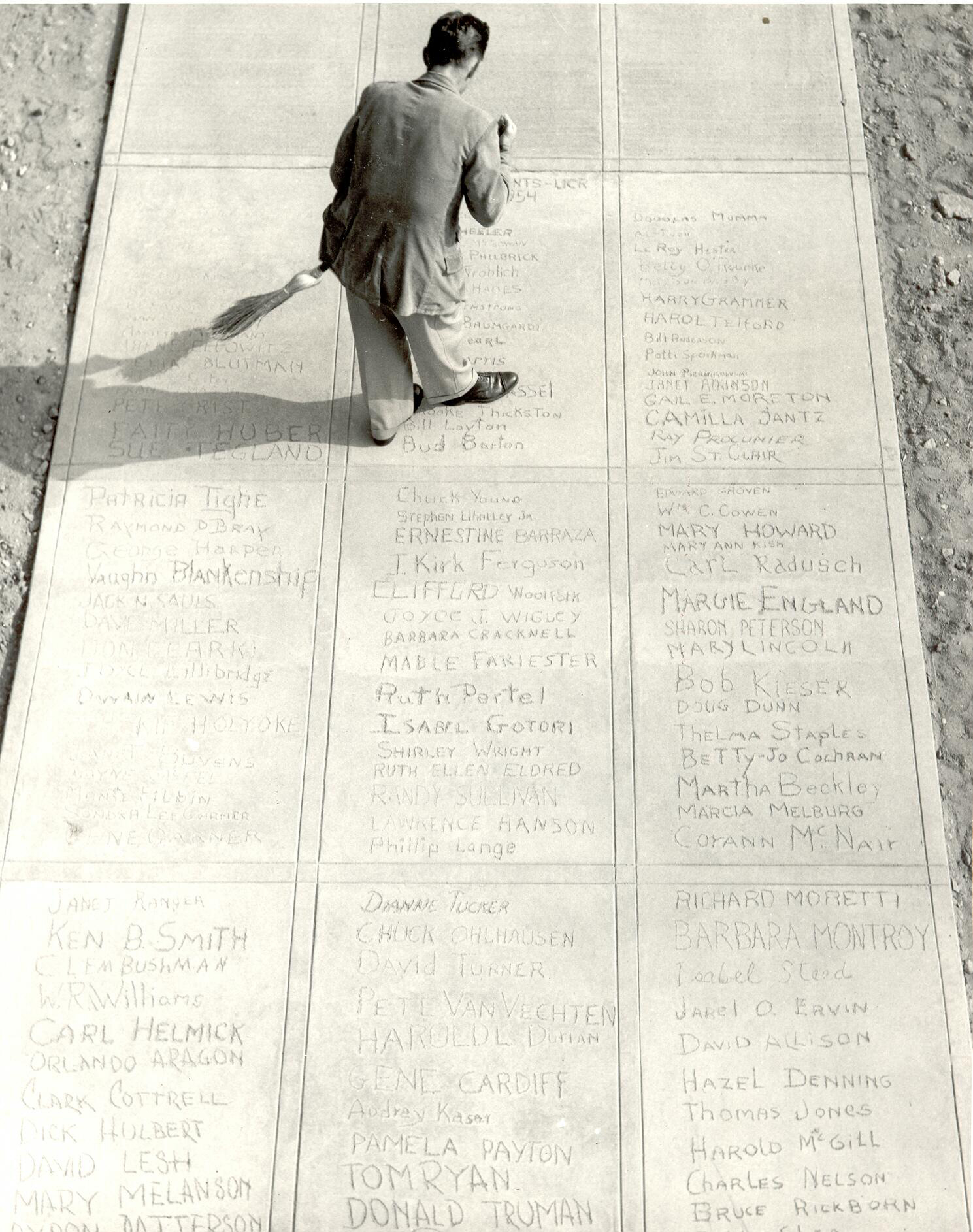 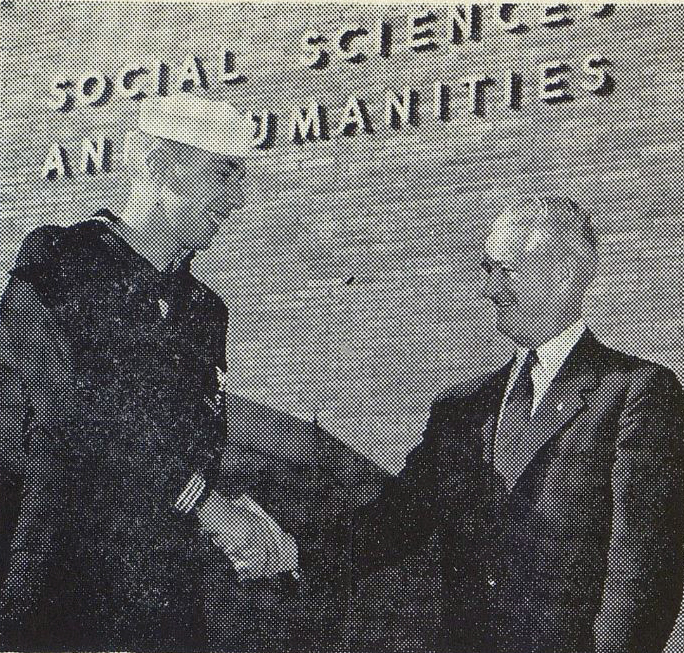 UCR’s student body in 1954 was comprised of one hundred and twenty-seven students. Compared to today’s enrollment of 23,278 students, that means our first crop of students was only 0.55% the size of today's student population. Of the original 127, only 107 are pictured below. (Full size image is available on Calisphere.) 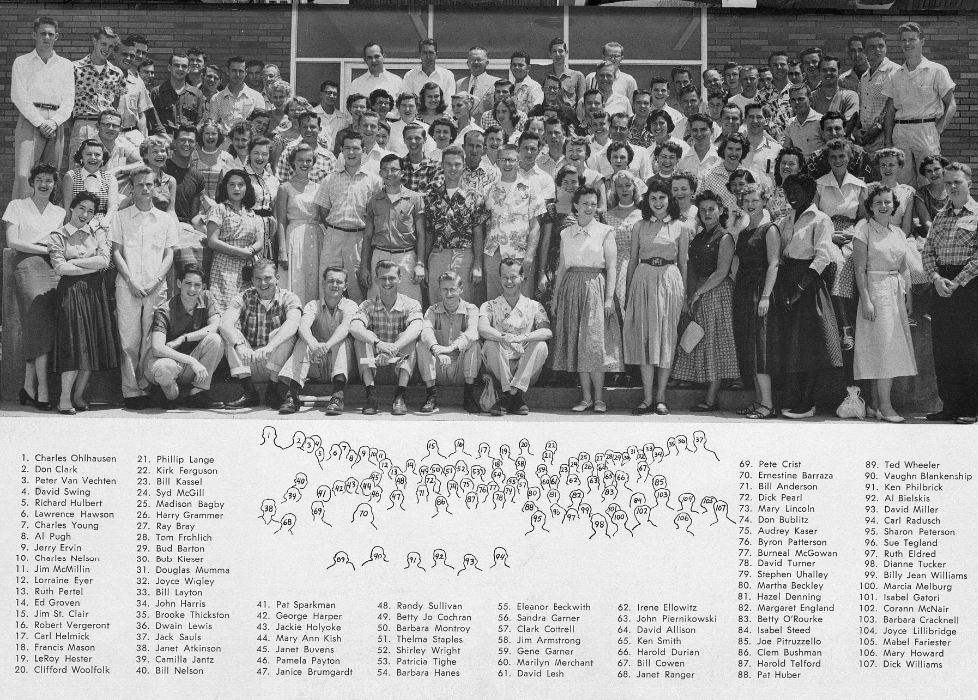 Enrollment in the early years was predominantly white, and the first African-American to graduate from UC Riverside was Roy Overstreet (pictured below, number 12) in 1958. 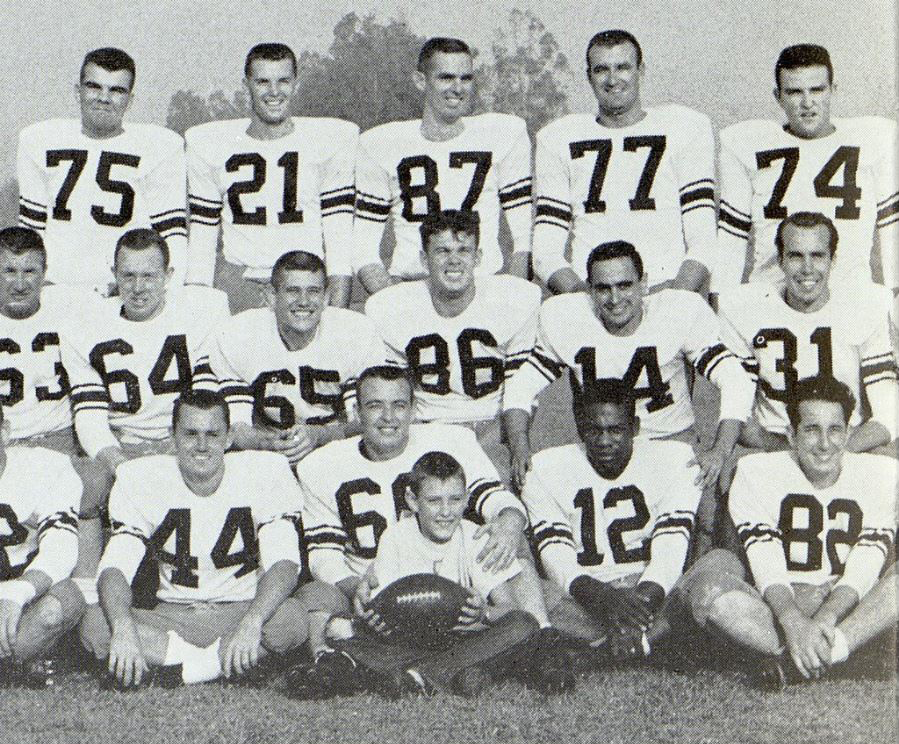 Now, 86% of UCR's students are non-white and 57% percent are first-generation college students, according to UCR Rankings and Quick Facts.

Gordon Watkins (below, center) served as UC Riverside's first Provost from 1949-1956. He is also the namesake for Watkins Hall. 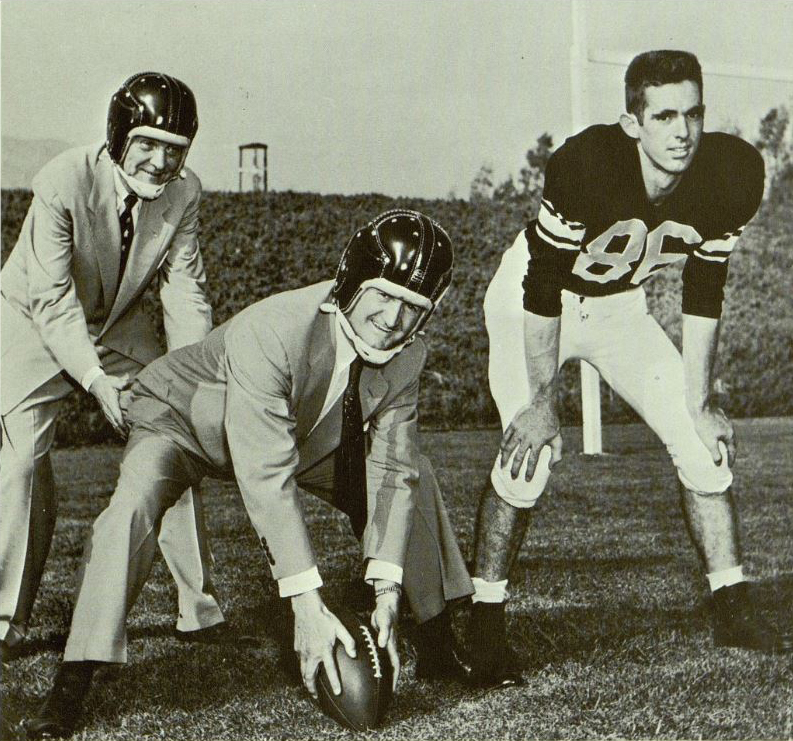 UC Riverside students built the big “C” on Box Springs Mountain in August 1955. At 132 feet long, it is the largest concrete block letter on record – larger than the “C” at any other UC campus. 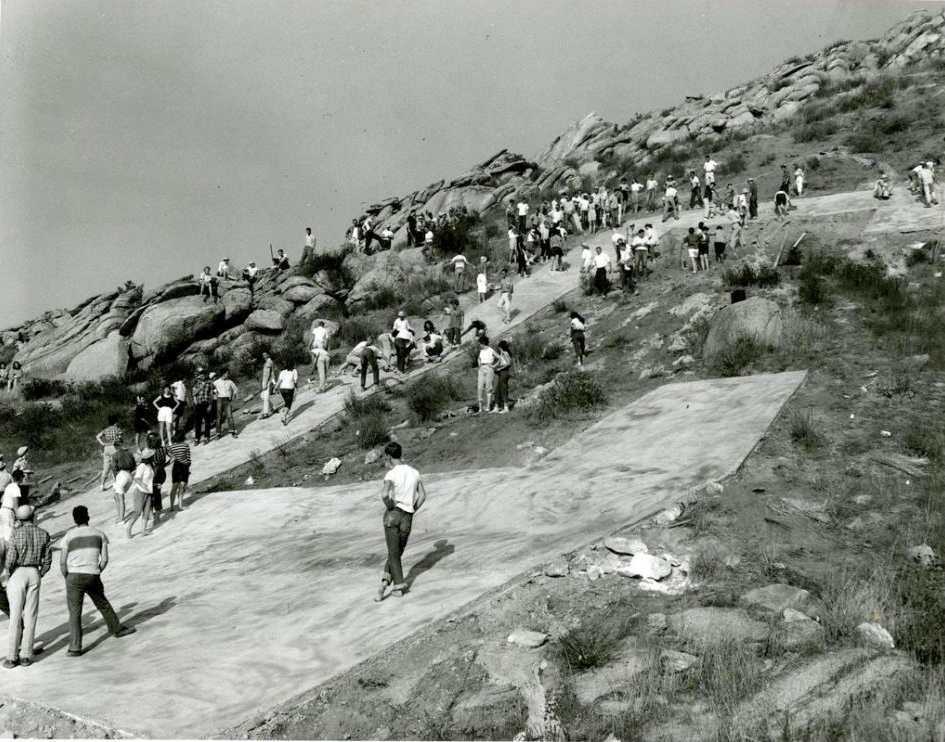 Here is an article from UCR's 1954 yearbook with details about the history behind the big "C": 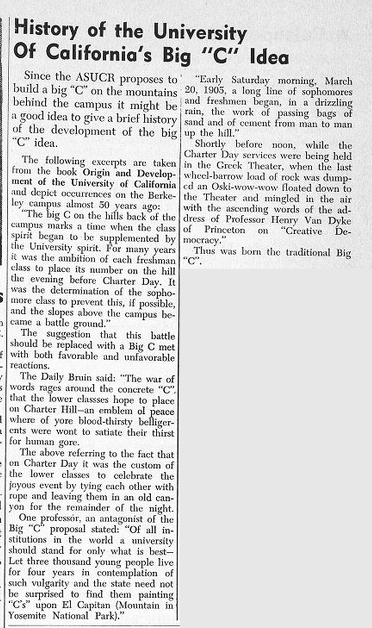 In 1907, the Citrus Experiment Station measured only 23 acres. 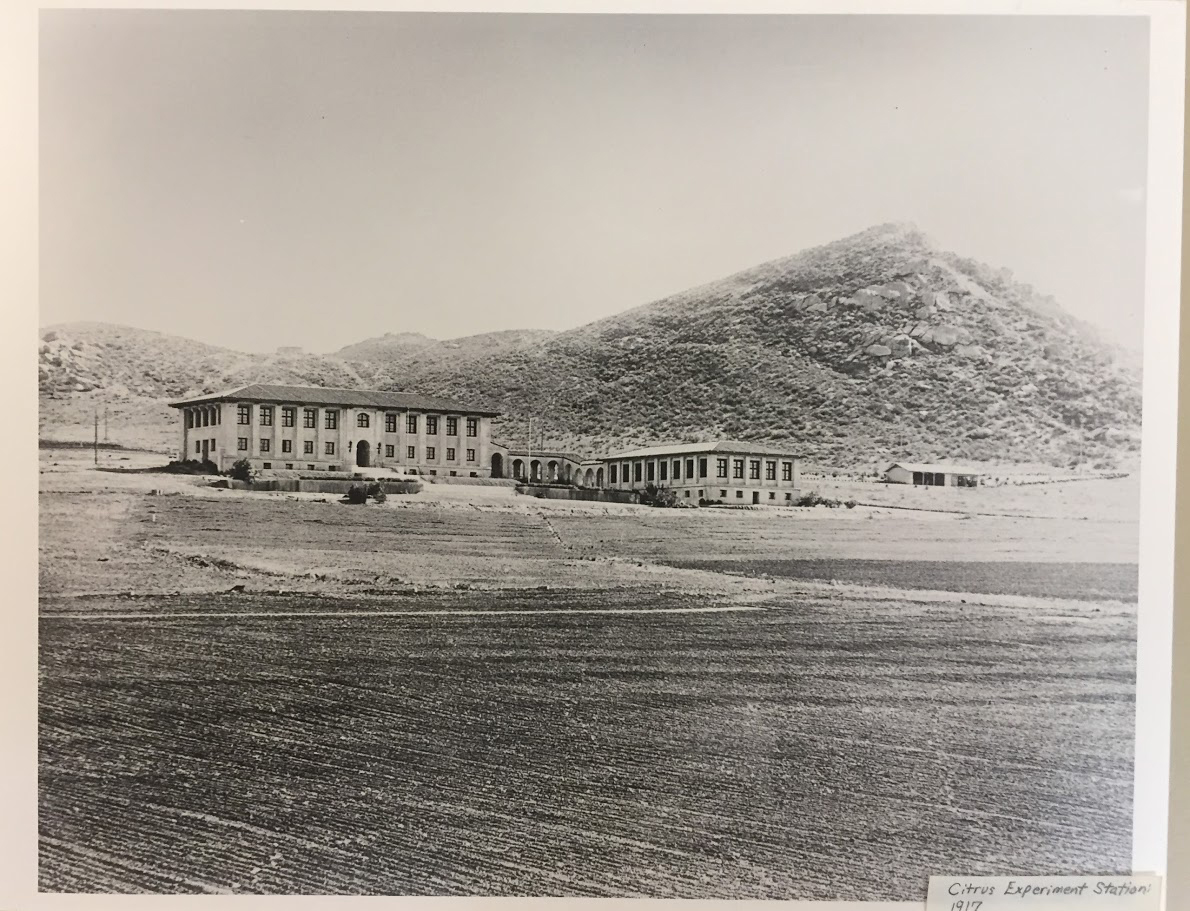 In 1955, the student body voted to adopt “Highlanders” as UC Riverside's campus mascot, inspired because UCR had the highest elevation of all the UC campuses. Various campus groups and buildings also embraced the Scottish theme.

Early iterations of the UCR Highlander included this illustration of Scotty Highlander, first pictured in the 1955 yearbook, The Tartan: 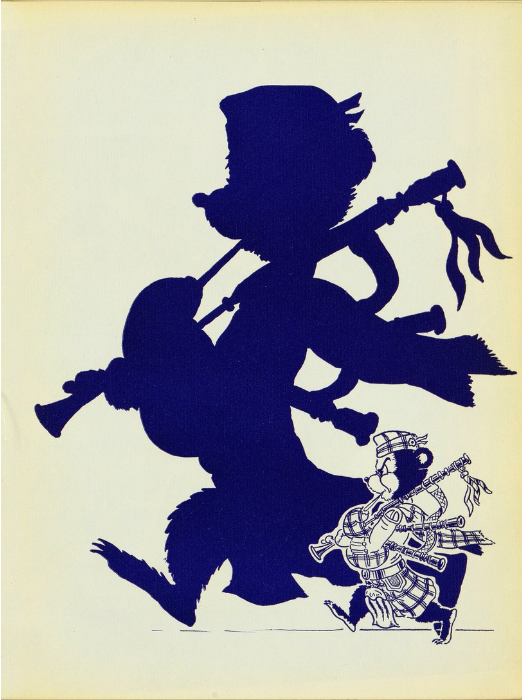 A young boy named Dick Hull and a bagpiper, also in 1955: 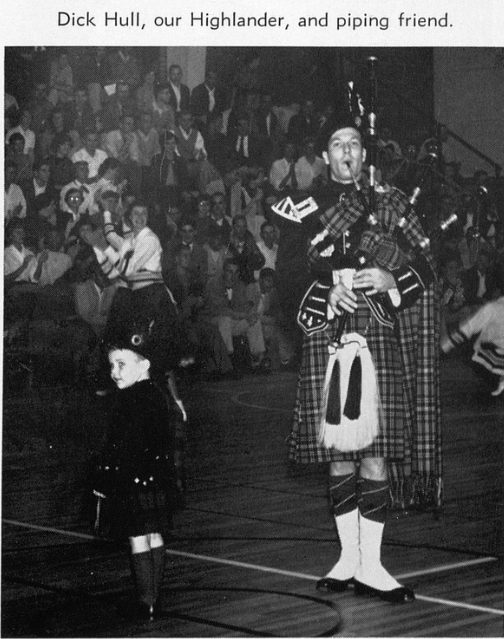 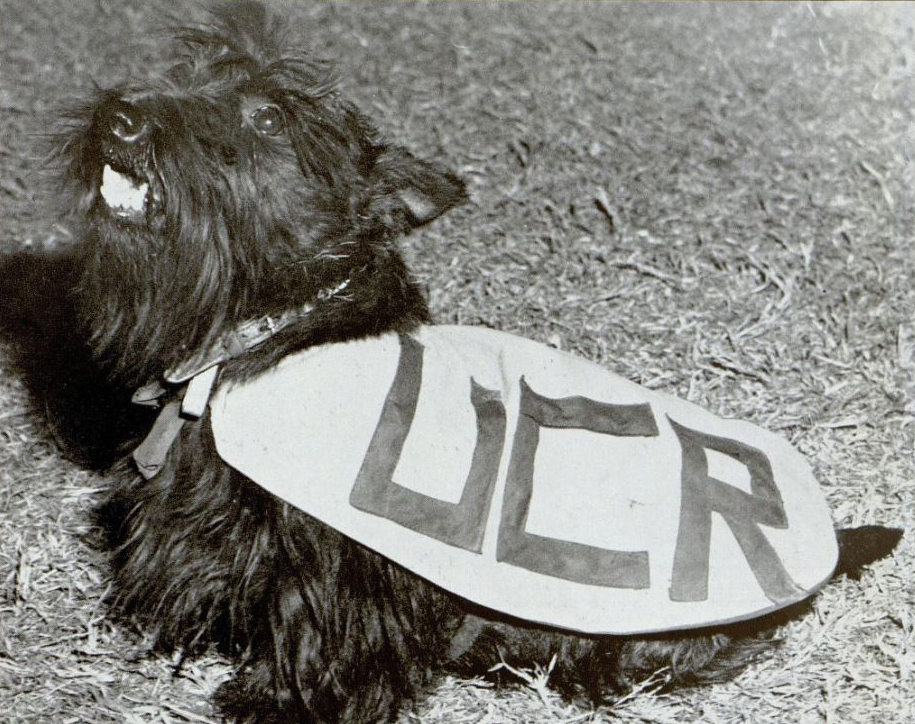 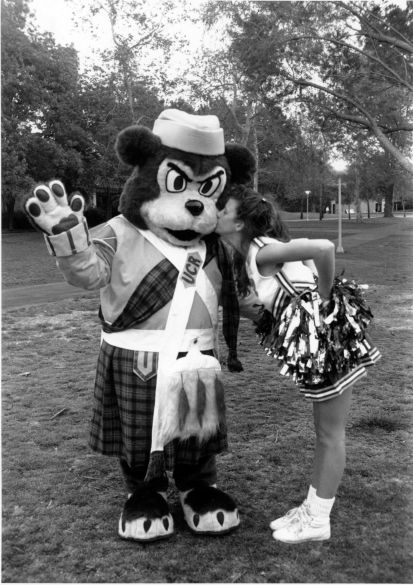 And a near miss for UCR's mascot, Humphrey the Buffalo in 1955: 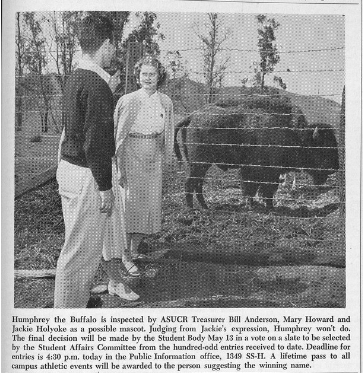 UCR's 1955 Yearbook was called “The Tartan.” In Scottish culture, each family's tartan was unique in pattern and color. UC Riverside's tartan is comprised of four colors that represent the four core values of Tartan Soul. 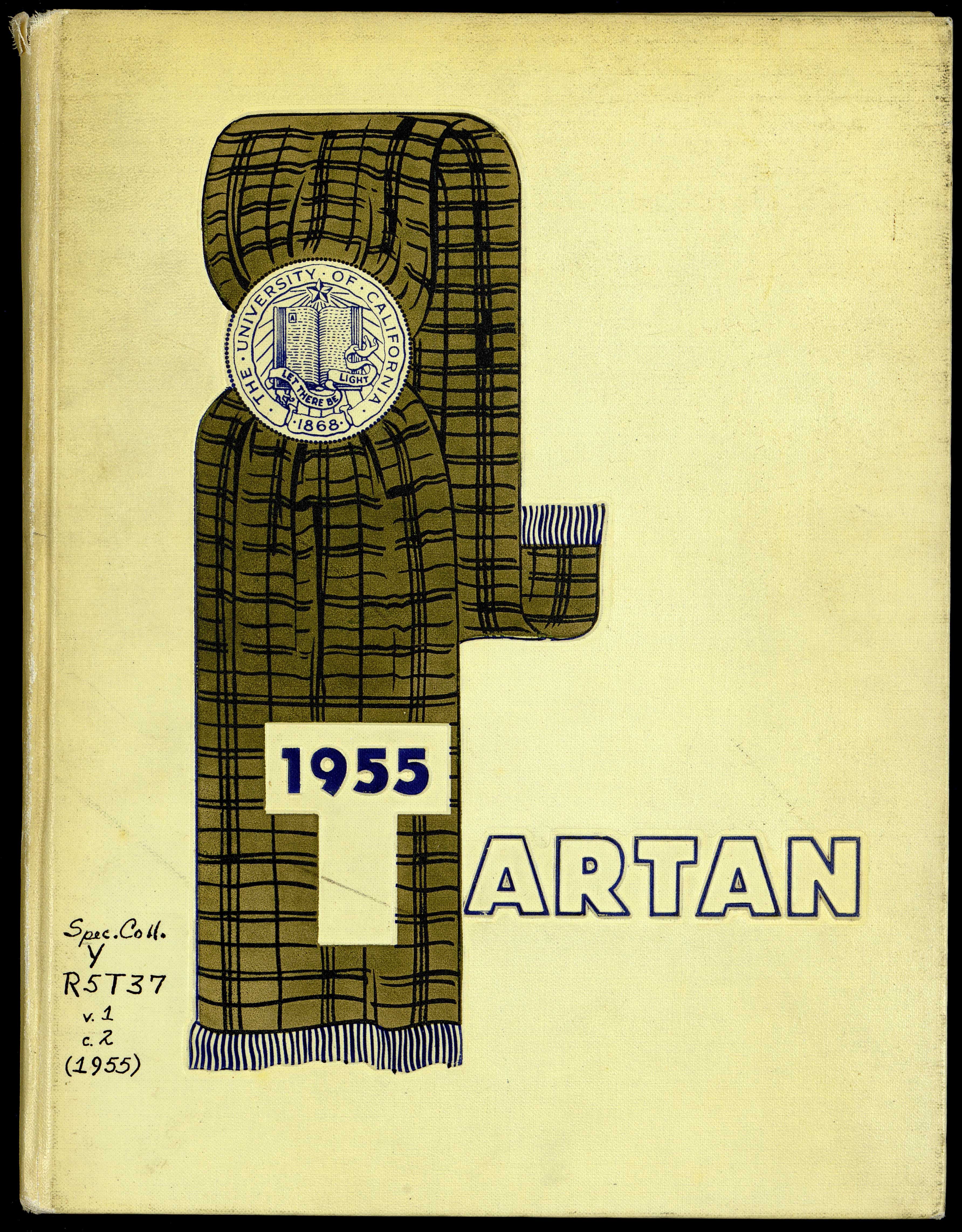 On Oct. 2, 1966, the dedication of UC Riverside's campus landmark Boyd Bell Tower took place. The carillon and tower at UCR were a gift from former UC regent Philip Boyd and his wife Dorothy. The bells range in weight from 5,091 pounds to 28 pounds and are housed in the bell chamber at the top of the 161 foot tall tower. 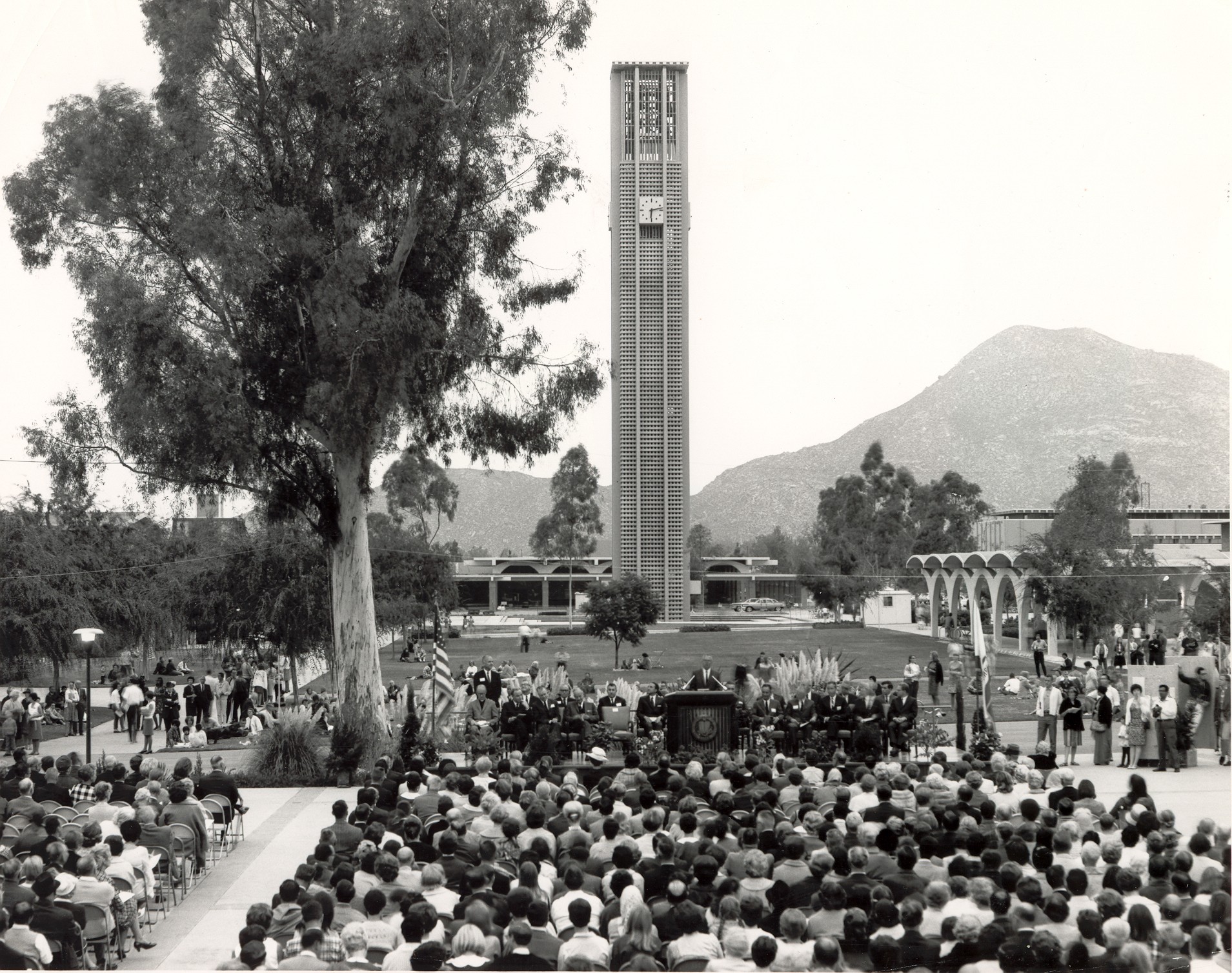 The Bell Tower was also pictured on the 1966 cover of The Tartan: 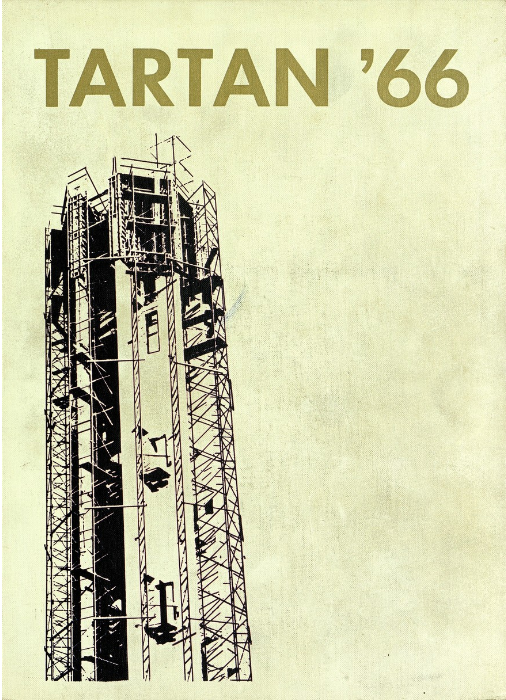 The Bell Tower's Carillonneur, David Christensen gives a live weekly concert on Mondays at 12 noon (with a few exceptions). He is the third Carillonneur at UCR since 1987, and has performed more than 500 concerts with music from a wide variety of genres.

In 1985, UC Riverside renamed the main campus library in honor of its recently deceased Chancellor, Tomás Rivera, who was the first Mexican-American Chancellor at a University of California campus. 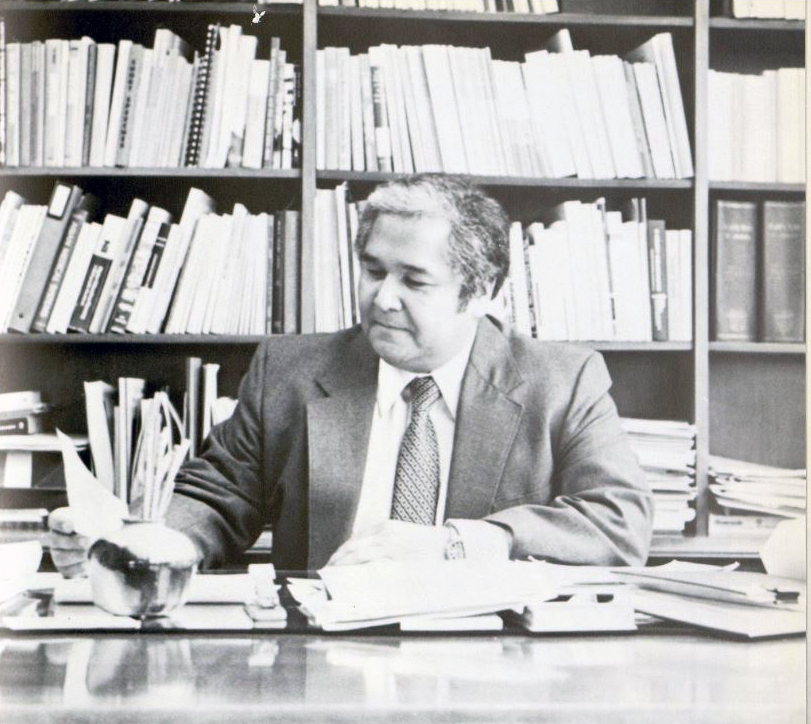 We invite you to learn more about UC Riverside's history by viewing the UCR yearbooks online or by visiting University Archives on the fourth floor of Rivera Library to look through old photographs, campus flyers, archival copies of campus newspapers, and much more.